Once upon a time there was a beautiful little girl.  She was very special but, as in all fairy tales, she was given certain challenges.  As soon as she was born she was whisked off to the first doctor, but he reached deep inside her heart and made it strong.  His magic would allow the girl to live a long life and run fast. The girl's parents were well pleased.

But some of these doctors gave her shots and stuck needles in her arms.  Sometimes she would visit a doctor, fall asleep, and wake up feeling sick in a different place.  That was scary.  One time the little girl was very, very ill and stayed in a hospital where they had the temerity to vacuum her nose like a peasant.  Once they actually held her trying to get pictures!  Audacious paparazzi!

The girl did not care for these gross invasions of personal space.  Their paltry compensation - stickers! ice cream! - was beneath her and she scorned it all.  (Well, maybe not the ice cream but it was wildly insufficient.)

The girl began to believe her parents had abdicated their duties.  She ignored their entreaties and became an expert at spotting and eluding anyone with medical training.  If cornered, she would roar like a dragon and fight back.  Hard.

Though she was impressively fierce, this made her parents sad.  They loved her very much and wanted her to have all the flowers and laughter.  They believed these alchemists could help, but they wanted her to be happy too.  Confusion and darkness spread across the land. 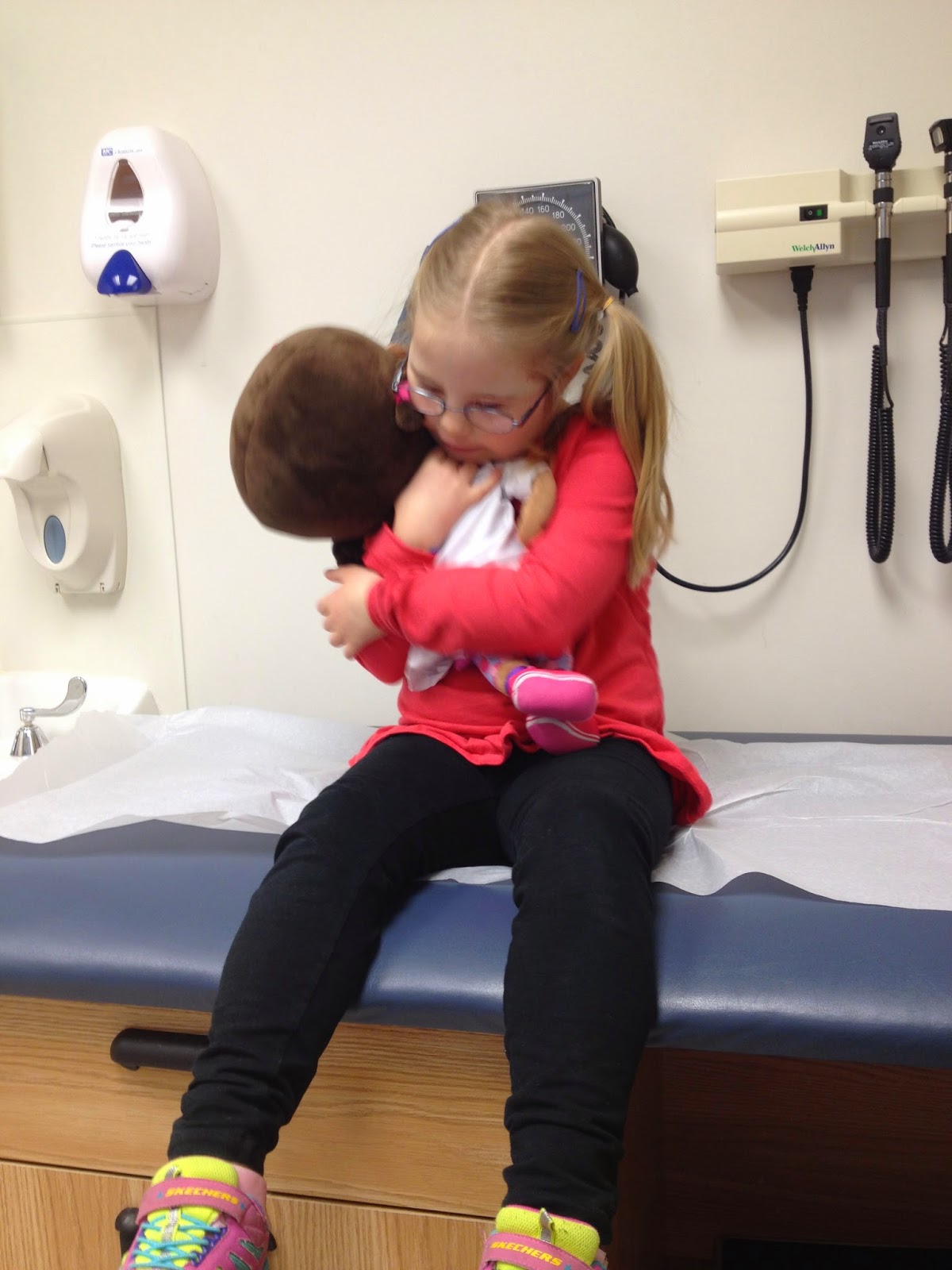 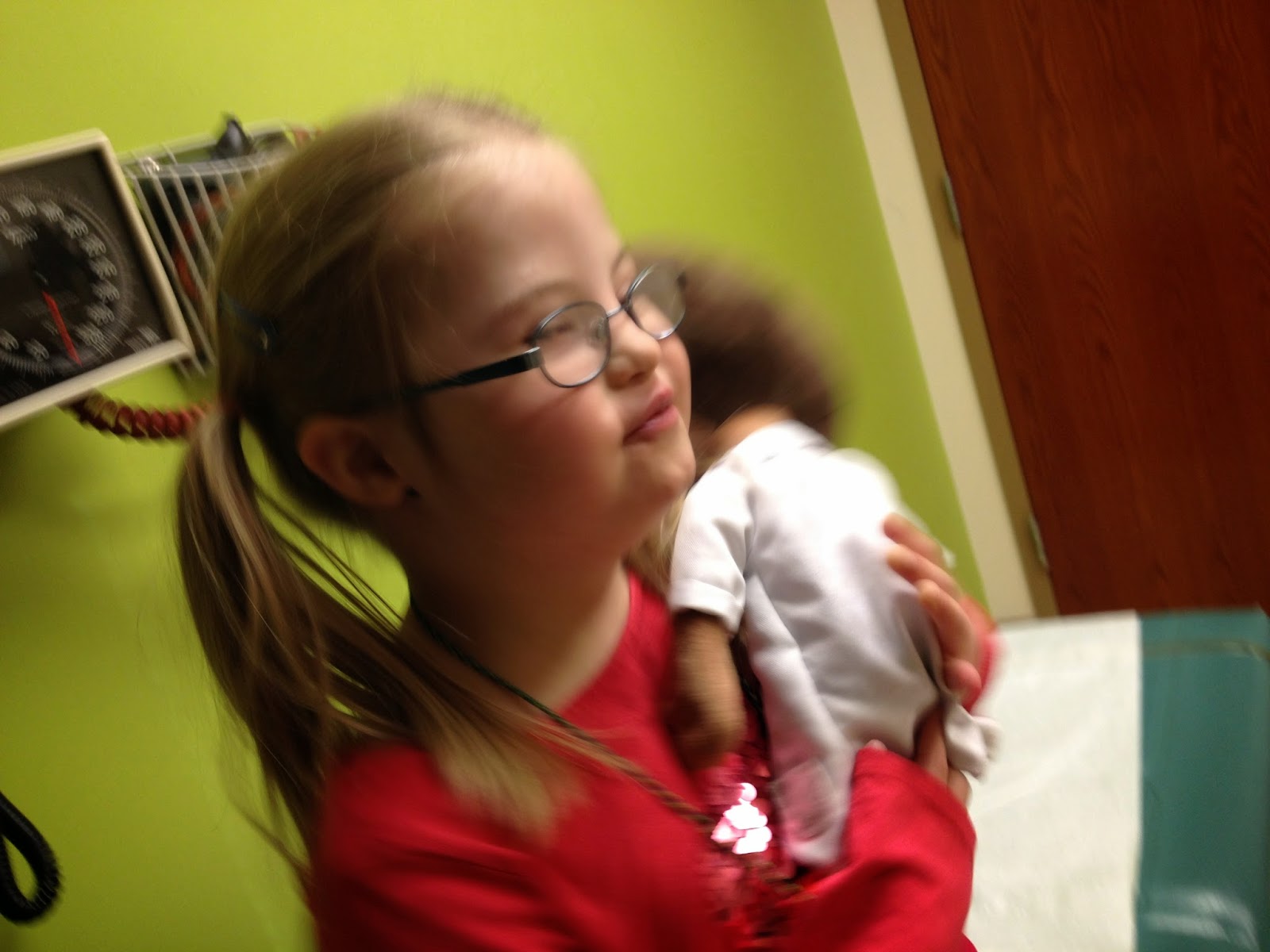 Because of you, the girl decided to give the doctors another chance.  Perhaps not aallll of them were evil trolls, after all?  She started bringing you with her to appointments for a second opinion. 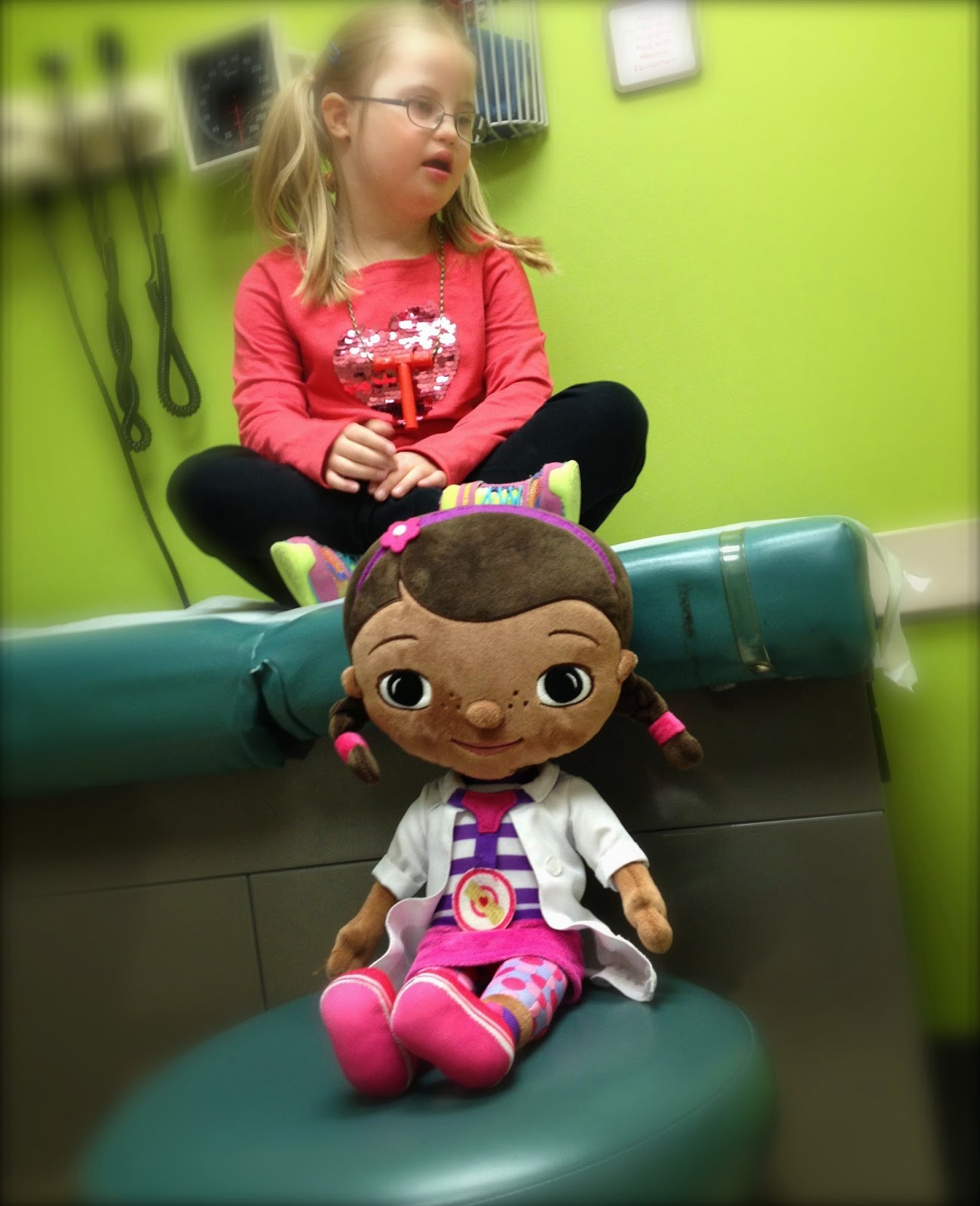 Like a food taster of old, you would gallantly test the equipment on her behalf. 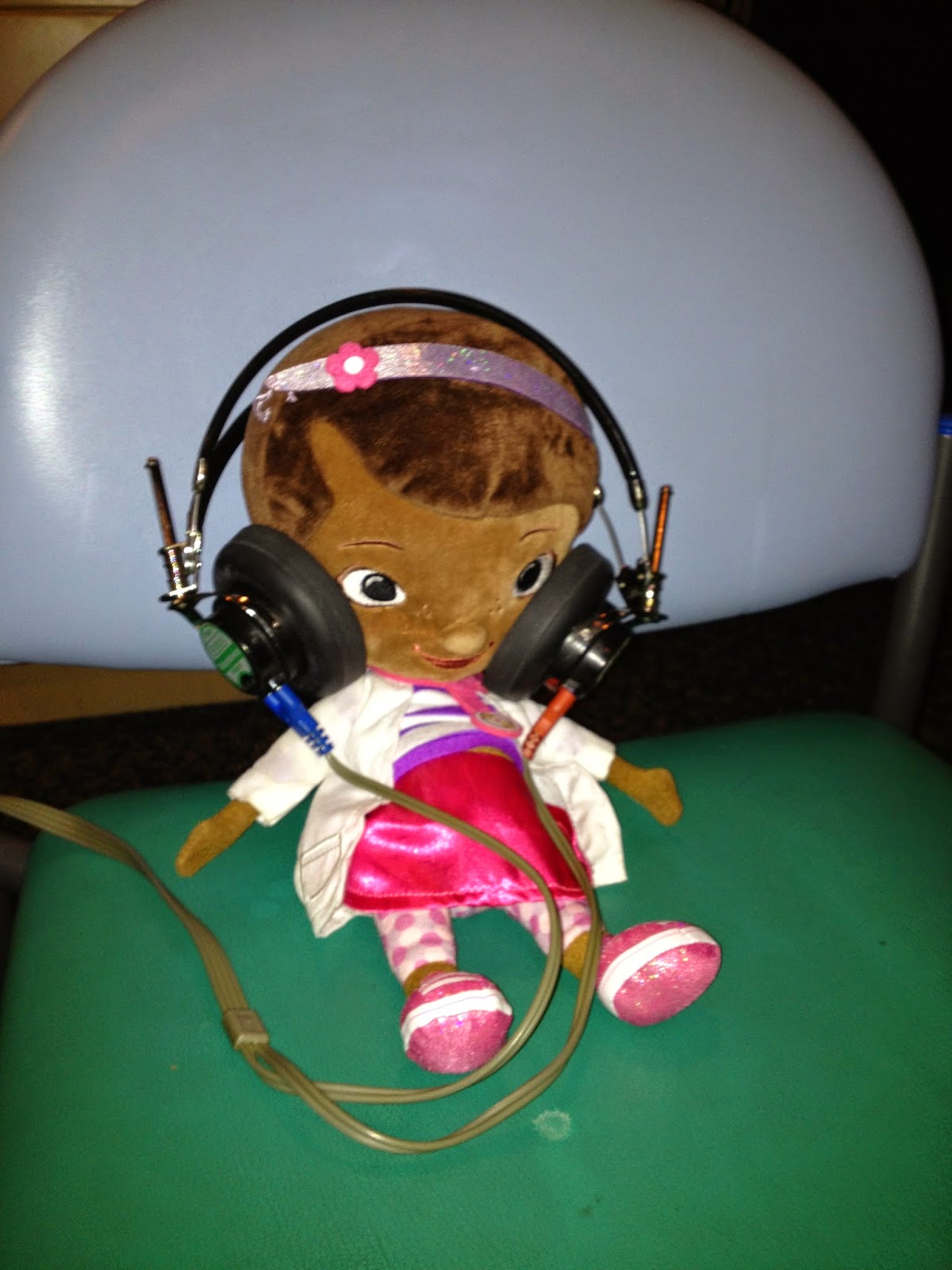 You submitted to exams to evaluate the physician's technique.  Charlatans who failed to respect or recognize their peer were quickly dispatched. 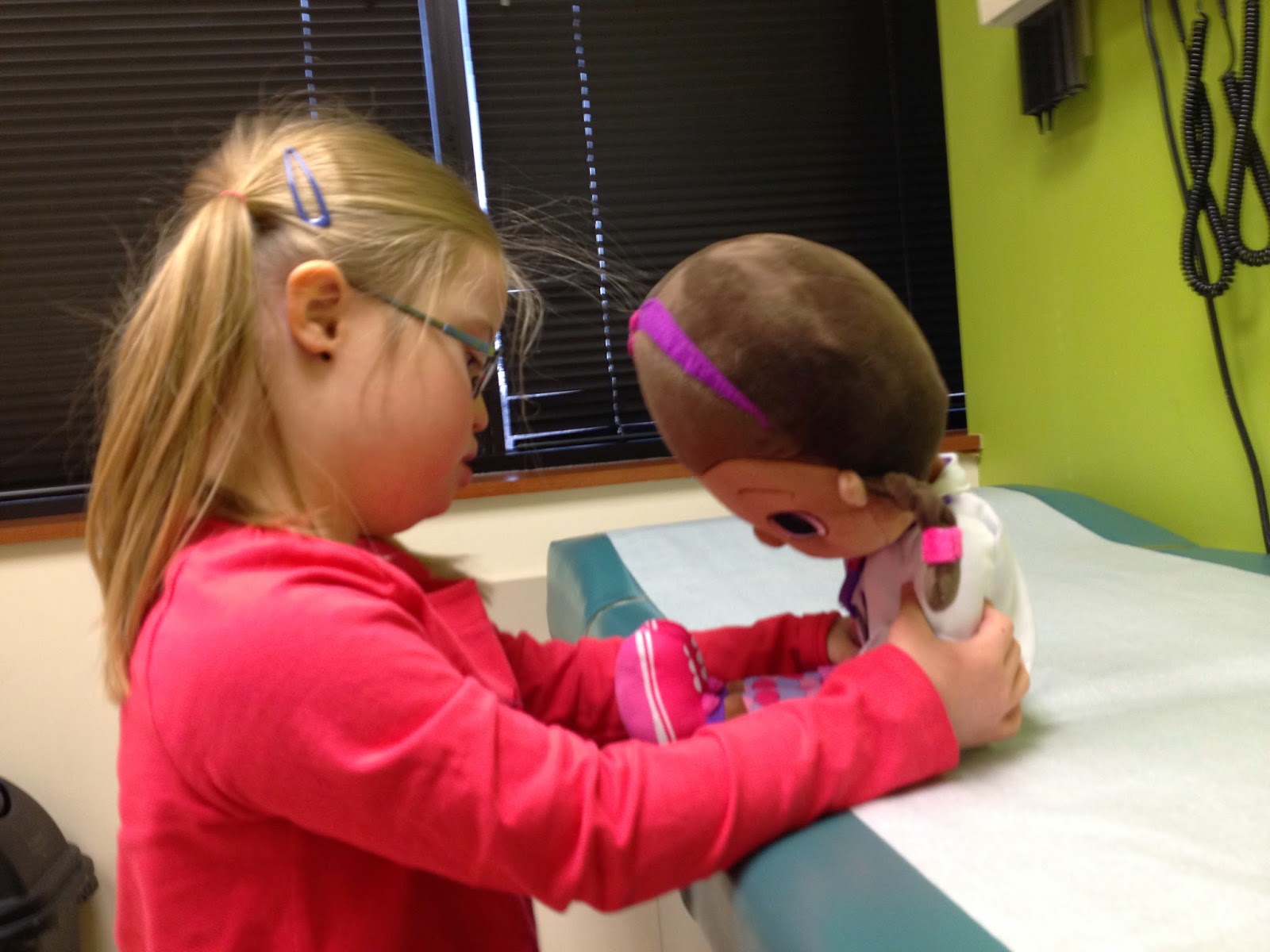 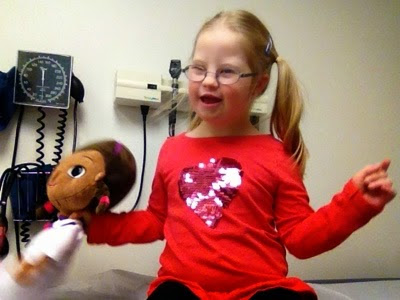 Thank you, Doc McStuffins.
Thank you.
Posted by krlr at 6:02 AM 2 comments

Things to be grateful for on this first day of yet another week:
Pediatric dentists who have Saturday hours, and who call to remind me to order my girl's pre-dental antibiotics.
And the sun, which made the pavement sparkle like the night sky as I walked over to the other building for yet another meeting. 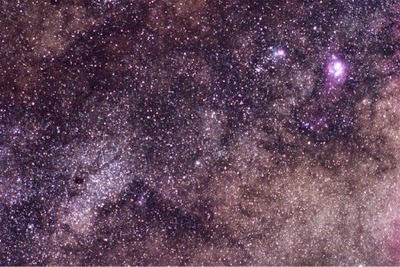 Last Sunday I ran 9 miles.  It was in the 20s with a biting wind and I considered bailing, but I paid good cash money for a race next month, my first in 18 months, and I don't want to embarrass myself.

(Plantar fasciitis is the devil.  It's been a slow recovery).

I also needed to get out the house.  I was snappy and tense and didn't like the sound of my voice; nor did I want to deal with the damn dirty kitchen (again) or laundry pile (still and always).

The sidewalks were covered in snow and ice, forcing me & my shaky, aging ankles onto the road.    I told myself I'd just do the 5mile loop around town.

Two miles in, my hands were still cold inside my gloves and I'd stopped blowing my nose because the snot was insulating my sinuses.  But a mile later, when I reached the spot where my roads diverged, I turned right and kept going.

I ran facing traffic but my presence in the street still enraged one driver enough to warrant a double angry fist pump.  Another laid on the horn so aggressively I nearly fell into a snow bank.  But I also got a thumbs up from a farmer in a pick up and a not unattractive man grinned at me at a stop sign.  Most drivers just edged over a few feet and carried on.

By the time I made it back to my car and home I felt peaceful.  It was a nice reminder in the midst of my mid-life angst that the journey is the point.  Even off path and against traffic. 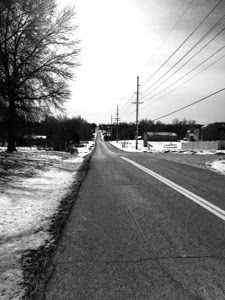