Last week I went in for a mammogram.  On Mother’s Day Matt handed me a letter asking me to come back for more tests.  My comment at the time ran along the lines of, “Are you fucking kidding me?  I don’t fucking have time for this fucking shit.”

Hey, no one promised you great prose or deep thoughts here.

The dark voice in my head decided that because the universe is stalking us and since my girl’s bloodwork came back clear, it must have set its sights on me instead and I was going to end up bald, tragically waste away, and orphan my children.

I also instantly decided that I wasn’t all that attached to my boobs.  They had failed to land me any Playboy gigs and, despite many tears and herbs and lactation consults, failed to fulfill their primary duty of feeding my babies.  Double mastectomy?  No problem.  Cut ‘em off.

What I was really freaked out about was the ultrasound.  Which is about the most innocuous, peaceful test you can get – dark room, nice pillow, warm gel, little wand… it’s almost like getting a massage.  Except at one perfectly routine ultrasound I found out my son had died.  And at another found out my girl’s heart could let her die too.

Apart from a brief expletive on FB, I downplayed the call back.  My peeps on FB assured me it happened all the time and was perfectly routine.  They would have called if it were anything serious.  I am not a wee fragile flower and refuse to freak out over remote hypotheticals when there is real actual tragedy in the world.  (At least I won’t do it publicly.)  I joked with Matt about the life insurance payout and reminded him to get a pre-nup so the hot nanny doesn’t run off with the kids’ money.  But when alone in the shower and in the car, I’d choke up – not about the leaving my children or the hot nanny or dying, but about being in that fucking room again and getting more bad news.  A perfectly normal response, right?  No?

I believe that is what they call an emotional trigger.

I went back yesterday and was smooshed and squeezed in a highly intimate and unnatural manner and they pronounced me good to go.

Right.  No big deal.  So unexciting, in fact, the additional films did the trick and I didn’t even get to the ultrasound.  *phew*

I went home, went running on my achy feet because I am alive goddammit and I can, had a glass of wine, and pondered the possibility that perhaps the universe is not stalking us after all and perhaps - just maybe - I might have some residual anxiety issues instead.

Not my boobs.
Obviously. 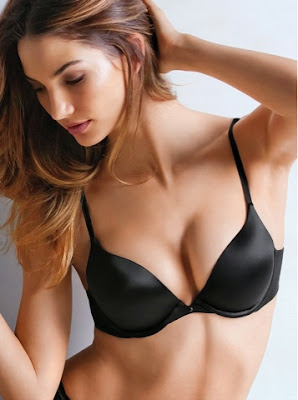 "Please No Gifts" - One Life Lesson, in 9 Parts

One rather awesome kid, plus
One fabulous group rate at the local pool, plus
One small measure of maternal guilt for skipping the annual Christmas cookie party and never buying him that swing set, plus
One more pinch of guilt for working, thus restricting his social & after school activities, plus
One set of lifeguards to minimize any incidental drowning, plus
One mega class of 30 kids, plus
One mother's hefty aversion to mountains of plastic crap, plus
One small teachable moment nudge from Mommy, plus
One (or two) reminders that he'll still get lots of stuff at the family party, equals
One memorable birthday blow-out and a mountain of donations for the Crisis Nursery.

Damn, but I am proud of him.
Happy 9th Birthday. 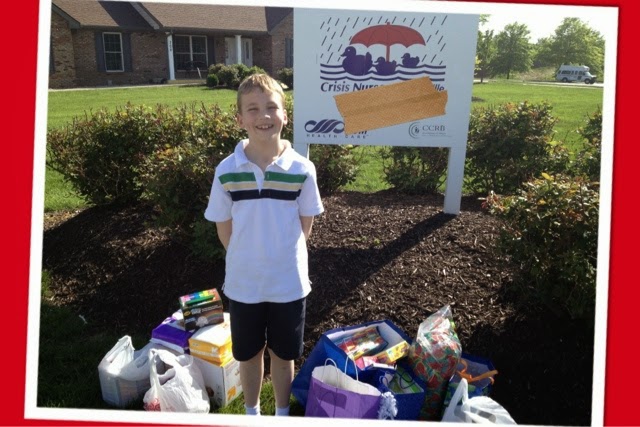 [I don't want to over-sell our altruism because my primary motivation in suggesting this admittedly WAS to keep the small, trip-able, foot-bruising plastastica out of the house but I think it worked out for the other parties too. :) ]

Smorgasbord on Aging, Stress, and Working.

- Since Easter I've pulled 4 all nighters for the corporate gods and I'm still hyper ventilating in the morning at the sheer volume of shit that needs to get done.

- These days, an "all nighter" means staying up till 2-3am.  I really should have powered through till dawn 'cause I could have used those extra 3-4 hours but…  then I'd have keeled over and not had to worry about anything ever again.  Come to think of it, that sounds rather relaxing.

- I thought I was supposed to need less sleep as I got older?  I call bullshit.

- I did take a little time off ~ On Friday I took The Girl to Children's for her annual labs.  Fun stuff.  We were about 4 months early because for the first time in her entire life she got a nosebleed.  And then a second.  And then she fell asleep on the stairs. And then her teacher sent home a note about how abnormally tired she was.  I didn't say anything because I knew I was being ridiculous but if there is anything that could break us right now it would be leukemia.  Fiscally, emotionally…  I know people find a way, but bankrupt, unemployed, and heavily medicated to stop the shrieking was not on my bucket list.  (Her labs were fine so I was being silly and also, YAY!  Also?  I wonder how other people live when they don't feel constantly stalked by Death.  I assume they're happier, yes?)).

- The weekend was chock full of parties and playdates and swim lessons.  All great stuff but Matt had to work both days and my daughter spent all of Saturday demonstrating her very best elopement techniques near various busy streets so by Sunday I was looking forward to going back to work.  Hyperventilating over my mammoth corporation's money is exponentially easier than keeping my small child off the neighbor's front bumper.

- I took another half day yesterday to get a mammogram and Girl Check.  I'm sorry, I know you must be jealous of my lollygagging ways, but please note this is not the wrinkle-free, sag-free, mid-30s baseline "practice" mammogram.  Shit's gettin' real, yo.

- Many years ago I wrote this post about meeting my friend RK for the first time.  I opened with a line I was sure, ABSOLUTELY CERTAIN, came from a Mid-East class I took in school.  Except I've been watching old West Wing episodes at night because I don't have the emotional energy to invest in anything new and….  I am full of crap.  It was President Bartlett.  I'm sure Aaron Sorkin and/or my college prof were not the first people to have stumbled into this bit of wisdom but I now have the highly uncomfortable feeling that MY stumbling into said bit of wisdom did not come courtesy of my Stafford loans.  Since pretty much everything I know or believe seems to have originated with the WW series, I'm wondering if I could get my tuition back, please?

- I am the heaviest I've ever been, including those immediate postpartum days, and despite all the love yourself/don't buy into the media hype bullshit I'm full of self-loathing.  I have not suddenly taken to eating pans full of brownies by myself in the closet (though that is enticing), leaving age, stress, and the slow creep of the western civilization to blame.

- Compounding that fun is an epic, albeit self-diagnosed case of plantar fasciitis. Nothing starts my day of better than getting up out of bed and nearly collapsing to the floor.  Nothing helps fight Middle Age Spread than being unable to workout because my feet hurt because they're carrying too many pounds, preventing me from working out to lose said pounds.  Feeling young and vibrant I am not.

- I did sign up for a cheapie Parks & Rec yoga class. Matt might kill me for sneaking off twice a week but it would be soooo much worse if I didn't.  Because while I'm fairly certain this is Yoga Lite and it's not even challenging for a yoga-novice like me, it is amazingly relaxing and I leave feeling much less creaky.  I'm also leaving in that gorgeous late afternoon light amid all the spring bulbs my tax dollars bought, and it's just blissful.

- On my 2nd or 3rd session I'm pretty sure I fell asleep during the ending meditation bit.  I jerked awake and everyone else was already sitting up and the teacher was saying her goodbyes.  I think I should have been embarrassed but… it was weirdly nice.
And on that note I'm off to bed!
Posted by krlr at 11:01 PM 1 comments

Conversations with My Children, Part II

Post story, just before lights out, while discussing the current status of The Boy's unrequited year-long crush ~

I'm raising a fatalist.  A romantic fatalist, but a fatalist nonetheless.

I'm going to remind him of this conversation when he's a teenager, helplessly adrift in a sea of testosterone and begging for money to take his latest trollop out for ice cream, a movie, and a little back seat action.

The Boy and the only woman who will ever matter :) 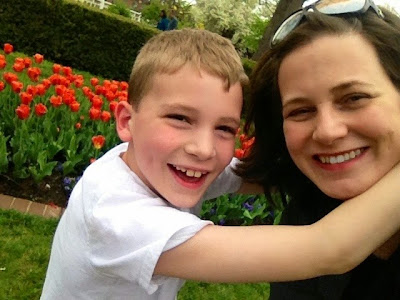 Conversations with My Children, Part I

While negotiating his new-found love of cooking, particularly pies - fruit pies, which has turned into a rather expensive interest, since until very recently things were decidedly Not In Season:


The Boy:  We could plant some blueberry bushes.
Me:  Yes, that would be cool.
The Boy:  And raspberry bushes, and an apple and peach tree too.
Me:  We could even get a couple chickens.  Home grown eggs are supposed to be way better than the grocery store ones.
The Boy:  WE COULD GET A COW AND HAVE FRESH MILK AND WHIPPED CREAM ALL THE TIME, AND I COULD MAKE ICE CREAM AND HOMEMADE BUTTER.  WE SHOULD MOVE TO A FARM!!!  CAN WE MOVE TO A FARM?  LET'S MOVE TO A FARM!
Me, thinking quietly to myself:  ((Or I could just shut up, buy you the $16 bag of frozen blueberries, and be grateful I don't have to milk them)).

Keep in mind this child is the spawn of me, queen of the PB&J, and someone who doesn't trust food that isn't salted, wrapped in plastic, frozen, and requires microwaving.  I cannot explain it. 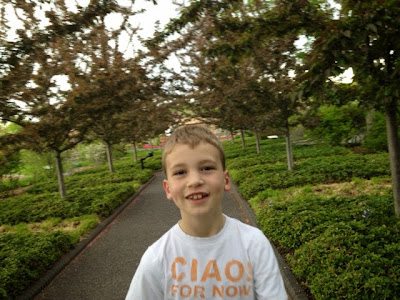