Sooo.... Yesterday's post about the minivan was supposed to be tongue-in-cheek but I kinda left off the funny and since I know almost no one, online or in real life, who DOESN'T own a minivan I should probably explain that although I've mocked and railed against them as an unpleasant side effect of the otherwise joyful life of suburban parent-hood (see also:  chucky cheese, barney), it only takes one soccer season to be convinced of their necessity, and of the evil genius that is Detroit's lure of spacious 7-passenger seating.  We would totally buy a minivan if we could but our cars (*knock on wood*) are running fine right now and replacing running vehicles isn't exactly in the budget.  Though I stand strong against the built in back seat DVR.

Anywhoodle, we held our annual cookie party last Sunday.  The first year, it was just the cousins, the year after I included the neighbors, and in 2010 I invited the soccer team (with absolutely no notice).  This year I finally took the plunge and invited the boy's class.  His ENTIRE class. So we rented the sub-division's clubhouse because a dozen kids + bright green frosting + a metric ton of sprinkles?  My house is never really really clean, but I draw the line at frosting on the ceiling.  This year I also sent real invitations with more than 48 hours notice.  Yay, me!

...Side note about RSVP-ing.  I am sometimes guilty of the Last Minute RSVP.  I was even guilty once (twice?) of the unintentional(!) but ignoble Ignoring of the Invite.  Matt also gently reminded me that tonight was Uncle Mike's party for which I also didn't formally send my regrets though it was 1500 miles away and I kinda assumed it was a courtesy invite only.  I will state, formally & for the record, that Karma is a bitch and I had it coming.  Because less than half the class responded, leaving me to fret over how many cookies were needed.  Leaving me to jump down into a rabbit warren of funky math:   how many cookies per child? (3? 5? 15?)  How many will they eat versus want to bring home, decorated?  How many siblings will show up?  How many cookies will the parents eat?  How many families will RSVP with less than 12 hours to go? (answer:  2)  How many appearances will be a complete surprise? (maybe 2?  4?  I never got a final kid-count).  How many cookies will the dogs eat when I have my back turned?  (See tomorrow's post about the turkey.  If you adopt one of my dogs, I will also send you a gross of complimentary gingerbread men!).  And, most important, how many cookies do those recipes really make?  Because when the sugar cookie recipe and the gingerbread cookie recipe both start with the same 2.5 cups of flour, there is no logical explanation as to why one makes 74 cookies and the other only 25.  And whatever else goes wrong (because something assuredly will), for the love of all that is Good and Sacred, we CANNOT run out of cookies.

I was determined to have everything done early, like a responsible adult, and planned to make all the dough Friday night, so it could be nice & chilled for rolling & cutting on Saturday.  Sadly, these were the only photos I took.  I was, at the time, highly amused by the 25 pound bag of flour we bought - 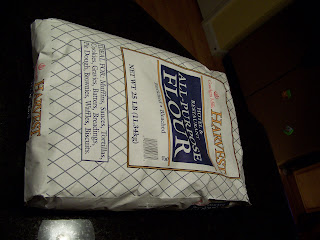 It's better if you have a little perspective - 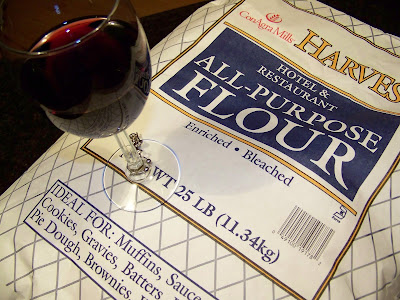 If I told you my Thanksgiving Day cranberry mojito story, I relay the following at risk of sounding like a total boozer, but I swear I only had one glass of wine.  Turns out the cookbook's typeface is really small and/or my eyes are getting really bad, because it wasn't till the 4th batch that I noticed it was 1.5 cups of sugar, not butter.  Which you'd think I would have caught, but nooo.... I had actually even said something to Matt about the egregious amounts of butter the (expletive) cookies took and best have a glass of red wine eat some oatmeal to counteract all that potential cholesterol.  He laughed.  I made 3 more batches. Awesome.

Anyway, even after dumping my first attempts, I was still in the zone, had a production line set up, and my mother in law's fancy new mixmaster running.  I think I ended up making 7-8 batches each, of sugar AND gingerbread? Craziness.  I spent Saturday (after a yummy breakfast with RK) listening to old This American Life episodes and cutting out stars and trees and little people.  I did this ALL DAY but it was weirdly relaxing - roll, cut, 8 minutes in the oven, repeat.  Apparently there's a little bit of Martha Stewart in me somewhere - *shush* don't tell anyone.  Tragically, I took no more photos, though by the time I was finished I was surrounded by feet of cookies.  We ended up with about 10 kids from the boy's class, plus a bunch of other friends, and still sent gallon-sized plastic bags of extra cookies home with people so methinks I might've over-baked a tad, but all in all, a success.  The end.

(Except not.)
PS:  I had joked that I would've been insulted by the lack of RSVPs but I've never even met most of the parents so they couldn't possibly not like me (yet).  That pendulum then swung to the other extreme when a good half of the parents dropped their kids off at the party and ran.  Nice to meet you!  Sure, I'll watch your child even though you've never met me and I could be a screaming harridan (and never mind there are 15 other kids here and chances of me noticing your one kid slipping out the door and into the street are minimal).  Glad you trust me.  I realize we'll get to that point eventually, and there are lots of parents I know with whom I'd leave my kid at a party but the key concept there is that I KNOW them.  I might be over-protective and crazy, but it seems 6 is too young for Random People to watch?  I'll also acknowledge I used to watch Law & Order: SVU which left me a leetle bit paranoid.  Also, we had grown-up drinks which not enough people stayed to make a dent in, leaving me with a case of... oh wait, that's not a problem.  Carry on.
Posted by krlr at 1:34 AM