There's a lot of criticism of mommy bloggers violating their children's privacy.  I keep my kids' names untyped, & thus hopefully un-Googleable, and haven't posted any nekkid hiney shots so should they eventually make their way here, I hope they won't have too much to protest about.  [Also, as the New Year approaches and I'm reflexively forced to reflect, I'm left with the disturbing feeling that what I've mostly done here lately is whine, writing very little about the little creatures that keep mommy so busy, but that's a different post.]  But if the #1 rule is no skin shots, then what's the consensus on internal organs?  Honey bear, if you're mad at me in 20 years for sharing with the world what your ribs look like then, I will totally pay for your therapy.  'Cause mommy finds these jpegs to be a thing of wonder and joy.

My girl had her AAI xrays done about 2 months ago (oh jeez, has it really been 2 months?!).  The one radiologist said that bit was fine but wasn't sure about something else, so my pediatrician arranged for a second read at the Children's Hospital.  Except no one wanted to just mail it over or, god forbid, use Al Gore's nifty new technology and send it out into the vast unending blackness of cyberspace.  To be fair, I still get old school film Xrays at work all the time so it's entirely possible no one realized that Hospital#1 has gone digital but there were nonetheless shenanigans in getting the aptly named anti-climatically compact disc from Hospital#1 to Hospital#2.  Mission FINALLY accomplished today.

But not before burning myself a copy. 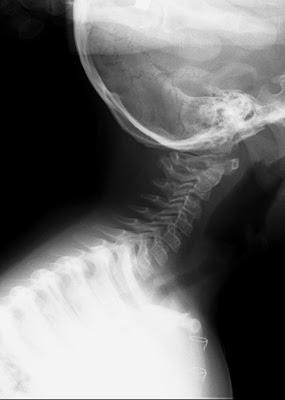 In the shot above you can see the wires used after her heart surgery to close her chest.  You can see the plates of her skull and I think the outlines of her cerebellum and some molars lurking under her gumline.  You can also see the hand bones of the tech who was holding her still and in the shot below there is clearly silent screaming at the indignity of it all.
And if I were a believer, I'd look at that burst of white in the middle of my girl's chest and see God himself.  God, science, and Gore-tex. They cut open her heart, fashioned a working pump out of what was in effect a water balloon, and then held the whole business together with those little wires.  Amazing. 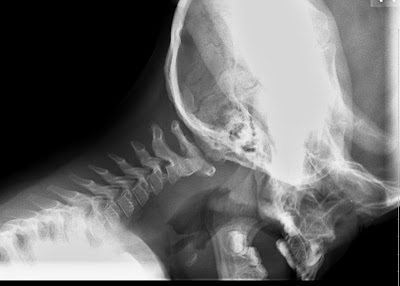 [Note to my new BIL:  If you have perchance made friends with anyone in the neuroradiology department and all that scientific curiosity makes you wonder what the first radiologist saw, say, at C1, then it would supremely easy for me to email you the jpegs.  In the name of science, of course.  Not because I'm paranoid enough to want a THIRD opinion.]
Posted by krlr at 9:05 PM