...continues.  I was thisclose to being caught up when my co-worker quit this week. *sigh*
Work-life balance is a myth.

However, for pure entertainment purposes, I have four post-ettes ripped almost right from the headlines ...of that month old paper you haven't recycled yet.  I tell ya, it's almost just like CNN over here.

Angelina Jolie gets a double mastectomy
This sparked quite a bit of conversation online but, although we have lots of other issues, breast cancer hasn't made an appearance in my near family.  Of course Gigi only had boys and my mom is an only child so my statistical group might be a little skewed, but let's not quibble.  So about a month ago I went to see my ob-gyn because the girls were sore, aching all the way down to the muscle and getting worse.  He said...      (*dramatic pause*)

I SHOULD DRINK LESS COFFEE.

(*sob*)
I'm not trying to make light of this and I know I should be grateful it's not anything real, but please, please, please don't take away my coffee.  Please?

Parents sue over their son's photo
I've thought off & on about the risks of putting my girl's picture out into the world but this space is tiny enough to avoid the creeps' radars and haven't done anything about it.  But I don't let the schools use or publish either kids' photo.  Because I am a hypocrite.  Of which I was again reminded when The Girl's daycare primary called a couple weeks ago to ask if I wanted her included in the end of year video.  I said no but thanked them for asking - I'm sure they were just as worried I'd flip out over the exclusion as the potential liability for breaching the 'no photo' form.  It's got to be tough for them to navigate a bunch of ferociously overly-sensitive parents.  Meanwhile I'm on a self imposed photo blog ban till I get this watermarking thing figured out.  Time to follow my own obscure, conflicting, Kafka-like rules.

This post by a huge NDSS fundraiser, telling them off.
Unlike the NDSS, our local group’s new president has taken the ‘advocacy’ in their mission statement to heart and has been emailing updates on the Robert Ethan Saylor case, calls to contact state congressmen to preserve early intervention funding, and federal Reps on the seclusion/restraint bill.  Weirdly I can push, bully, and charm people on the phone all day at work without qualm, but I hate-hate-hate talking to anyone at home.  Cable people and babysitters are solely Matt’s responsibility.  But goaded into action by my local group, I summoned up all my emotional reserves and made whopping 1 minute phone calls to each of my Reps’ snarky staffers.  And then I signed up for this year’s Step Up walk [ours is a “Step Up,” not a Buddy Walk, so they don’t have to kick back any of their money to the NDSS] because I can’t complain about the national groups' colossal failures without supporting my group when it’s doing it right.  I’m not that much of a hypocrite.

Although I gave my friends and family exactly two weeks notice and of course everyone is booked. *sigh*  Baby steps, people, baby steps.

Manhattan women buy disability guides
I know you all heard about this, but it reminded me I never wrote about our last trip to Disney in January.  Sadly it will likely be literally the LAST trip, because just after we came home Disney abruptly killed our travel industry discount, both cars now need timing belts (and happy car fairy dust), and we (surprise!) didn't withhold nearly enough money last year for the IRS.  Boo.

Oh, wait...  So if we stand in line with the nice lady from New York and her family she'd pay for our trip?  We wouldn't have to talk to her, or anything, would we?  Hmmm.

I'm joking!  (kind of.  maybe.  depends on the offer - what's our souvenir allowance?)

We were there to run Disney's half marathon but I brilliantly took the kids to the park the day before in awful, terrible, no good, very bad shoes.  My feet hurt by the end of the day and they hurt worse the next morning, right before I was supposed to run 13 miles on them.  I was lucky though, because I ran the whole way with this nice lady here and it was the first time I've been able to talk and run at the same time.  It was a personal worst, as far as time goes, and I whimpered for days after like I was walking on broken glass, but I didn't think you could have that much fun running.  It was awesome. 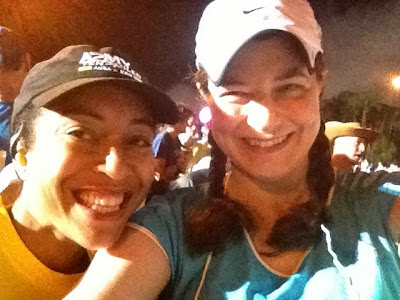 There were fireworks!
Every race needs fireworks. 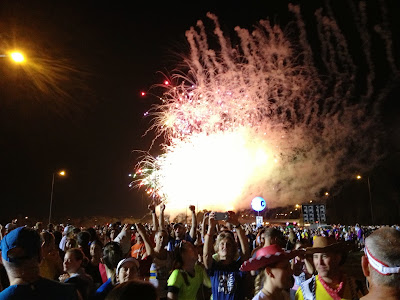 At one point in the park I was holding The Girl while Matt and The Boy were off procuring provisions.  A guy approached us, said my girl was gorgeous (of course!), and to dispel the potential creepiness, he waved over at his family, including an older boy with Ds, they waved back, and we all chuckled a bit.  Then he palmed his special needs pass like it was hot watch and asked if I knew what it was.  Then I really laughed and showed him ours.  Who knew?  There really IS a secret club card.

I truly hope that the socialite doesn't screw it up for everyone else.  The first time we went I felt a little guilty because The Girl wasn't any more of a pill than any other 3 year old, but there's no way my almost-5 year old tornado could stand in line for an hour or two.  Not a chance.  Even the couple times the special needs line was long and we had to wait were not great - she's too big to hold for long, yelled to get out of her stroller, and kept trying to bolt thru the crowds.  I suppose this would be more persuasive for Disney if I didn't preempt my story by saying we were too poor to visit but we'll get back - one way or another! 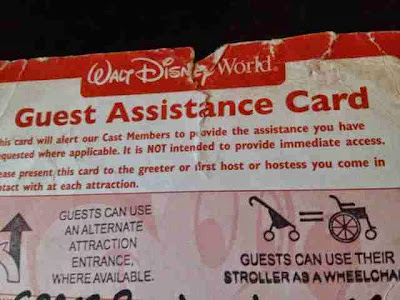