I know I owe y'all an update from last week but I'm leaving for a lavish (*snort*) work sponsored/kid free trip to sunny SoCal tomorrow and have been working a LOT in anticipation.  Conveniently, Matt's back went out at the same time, and then he caught the flu.  Nothing but good times around here!
~~~~~~~~~~~~~~~~
An email to the office:
Subject:  March 21st... COOKIES!
Alternative Subject:  The decorating seemed like a good idea at 11:00 last night.
Or:  Why Martha Stewart need not fear me.

Guess what? Today is World Down Syndrome Day.  I brought in cookies to celebrate & also to bribe you to read the rest of this.

For our new folks and anyone else who hasn’t noticed all the adorable photos at my desk, my daughter has Down syndrome.

But, fair warning, I will take your head off if I hear you use the word retarded.
For those of you who object to the language police:
Cheers. Enjoy the cookies.


I made the photo blurry & tweaked the color because in real life they...
were even sadder looking.  This is why I'm not on Pinterest. 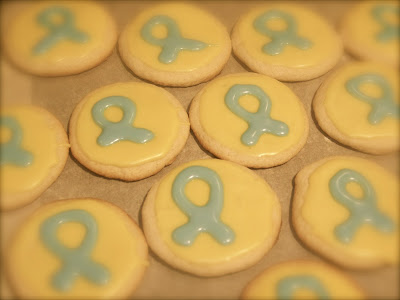