As it turns out, Maude's limp was not caused by a sprain, but rather by osteosarcoma in her shoulder.  A particularly aggressive osteosarcoma since she went from chipper, butt waggling, counter patrolling, snuggling FINE to unable to walk in less than a month. 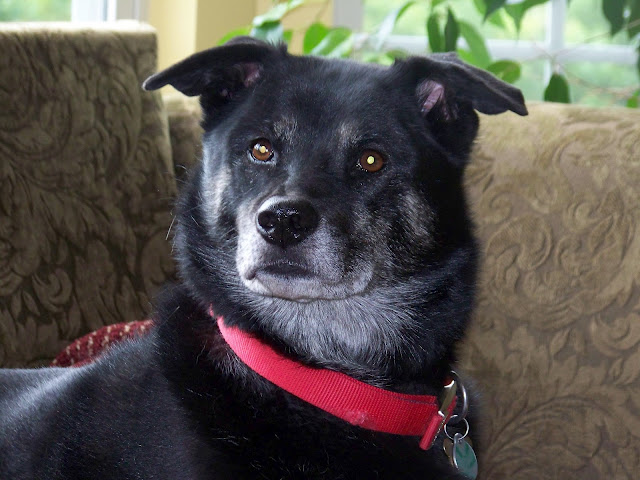 We spent a quiet weekend with her and indulged her with all the goodies we never let her have because she was a chubby, chubby puppy.  The Boy has cried some hard tears and wanted to know why we couldn't fix her and what happens if people get cancer.  Despite my deep reservations about religion and god I found myself telling him that she would be able to run and chase rabbits and go on long car rides all the time in doggie heaven.  And that she wouldn't hurt any more.  He wanted to take her on one last walk but she had gotten so bad, so fast, it wasn't possible.  We settled on one last car ride to McD's and a cheeseburger for each of them because he thought she'd like that  (Not to worry.  After he went to bed I made her a lovely last meal with real beef). 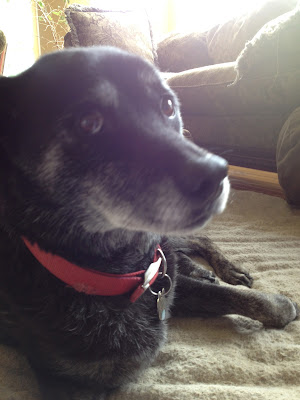 Both Matt and I thought she'd just pulled something again.  Last time she did that it cost us $4-500 to get a diagnoses and a bottle of doggie advil.  She would get these bursts of energy and dash across the yard or the kitchen and so we didn't take this current limp all that seriously.  She must have been in a lot of pain.  I feel particularly shitty about that.  She even bolted out of the garage door and down the street as Matt was trying to get her and the kids into the car to go see the vet on Friday.  He was NOT pleased and was going to skip the appointment but a while later a kid called the number on her collar - she was laying down on a path in the woods and couldn't get up. 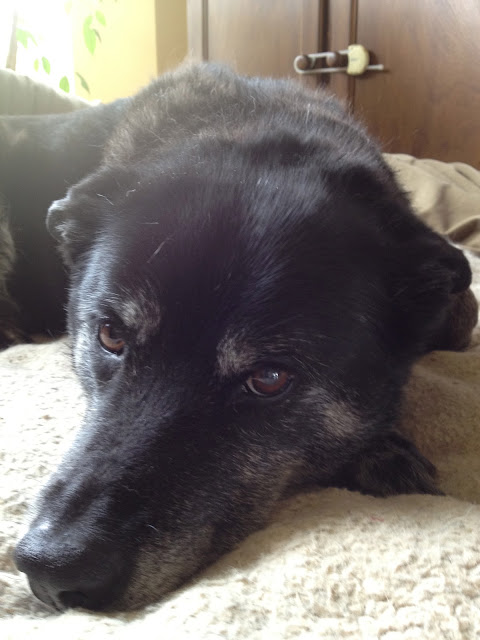 Matt had to carry her back home.  When he finally got her into the vet she was in such bad shape they immediately gave her a pain shot.  I was in California for my little sister's high school graduation (separate post coming) and didn't get home till Saturday.  She was just about due for another round of pain pills as I arrived and then, for the first time, I heard her whimper.  It's almost like she'd felt such relief after that shot and some heavy duty pills, that she couldn't bear it to start hurting again.  She also woke up whining at 3 this morning, only 4 hours into what was supposed to be an 8 hour pill cycle.
I took her on her last car ride tonight.  I also feel particularly shitty about that.  She LOVED going for a ride and regularly came with me on Wednesday car pools and milk & diaper runs.  If I wasn't careful, when I went into the garage she would plant herself next to the car and I would have to bodily drag her back inside the house, her nails trying to dig for traction in the concrete.  That was so annoying.  I wonder why she was heading to the woods when Matt was clearly trying to herd her into the car.
In the six years she was with us she also ate a mountain of dishtowels and a closetful of kids' clothes - anything that had come into contact with food.  Also annoying.  And gross, when they showed back up in the yard.  Her food scrounging was legendary - she had pulled more than one pot of pasta out of the sink by the handle and once demolished a bag of flour.  She had to be fed separately from the other two and there were always Logistics involved.  I can't believe it was bone cancer that got her and not the puffy lipoma on her side that we'd been monitoring for forever.  It's always the things you don't see coming.
She was every one's favorite dog.  She would lean against your leg and then flop over at your feet so you could rub her tummy.  When she sat she looked like Bill the Cat and it always cracked me up.  At night she would curl up behind my knees and in the morning she'd refuse to go downstairs with anyone but me.  That last car ride tonight was the greatest betrayal.  She jumped up at the sight of her leash and hobbled out.  But she didn't stick her nose out the window and needed help getting out of the car.  I held her head and rubbed behind her ears and told her she was a good dog.  And then she closed her eyes and let out a big sigh and she was gone.