Last fall The Girl went thru a 6-ish week long period of "GI upset".  Daycare called about every other day for us to come rescue her and we went thru testing, negotiating, and then outright begging for them to knock that off because taking 1.5 months off work is a really poor career move.

All the tests were negative and her doctor just said it can sometimes take six weeks to resolve.  SIX WEEKS.  Much to our dismay he was right about the time frame - it was Not Fun.

We seem to be on repeat.  It started sometime before Halloween and I got a call yesterday to pick her up (thankfully not till 5).  I'm still on the 4x10 plan, so am home with her today, but I'm really really, nervous about this next month.  Matt's taking off on Saturday for a week-long wedding shindig and I'm suppose to join him next Thursday.  There are already scheduling shenanigans and adding this to the stew will not make anything easier.

[Destination wedding!  I had to renew my passport!  ...So naturally the washing machine just threw a ball bearing, the toaster is only toasting one side, and I have to take my computer in because it's moving slower than the continents.  And now we have GI issues.  Murphy's law reigns supreme!]

She won't nap in her own room anymore but the couch is fair game.
She's been wearing her Halloween wings nearly non-stop this past week....
So many "angel" jokes, so little space. 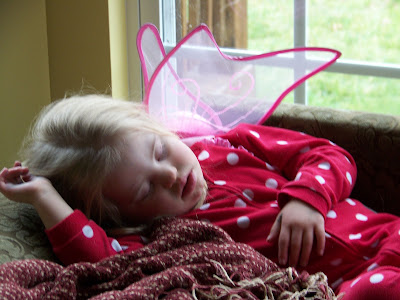 Funny things my son said about the election, below.  Posted here because FB has seen enough politics - not necessarily mine, except for my one outburst yesterday, but I think everyone is tired.  I realize yesterday's post was more anti-GOP than pro-Dem, and I didn't cover the economy, or the other 17 issues near & dear to my heart, but I'm happier having chucked my two pennies into the pool.  To all my friends who voted for the other guy - I still love you.
(Yes, even YOU!)

~  When explaining health insurance to him, he kept calling it life insurance.
Which it is, really.

~  This morning, while I was flipping between news stations:
"It's almost like the country has two presidents."
Hmmm.  I hope not, buddy.