In Praise of the OtterBox

I have a real post in the works but this will do for tonight.  I couldn't decide whether to call this "Why we don't have nice things" or "Freakish Bit of Good Fortune" and combining them was too long so this will be instead be an ode to the OtterBox which my in laws also wisely purchased when they all chipped in and bought my daughter an iPad.  Six months ago.

I think their primary goal was its use as an AAC so they could communicate with her, but we're still working on that.  In the meantime we have found some other wonderful apps and I am absolutely delighted with how The Girl has taken to it.  So delighted, in fact, that on Sunday I was bringing it so she could show her grandparents the magic they had bestowed while I took The Boy to a birthday party.

Matt was getting ready for work, I was doing my usual frantic I can't believe we're going to be late AGAIN scramble, and I put it on the roof of the car while I wrangled children and gift bags.  I remember thinking that was not the best place for it.  And then I drove off through a monsoon-like rainstorm.

Spoiler alert:  It was, indeed, NOT the best place.

About 20 miles later it suddenly dawned on me what I had done.  I pulled off to the side of the road, fruitlessly checked the roof, and then swore up a blue streak.  I felt ill.  Actually physically ill.  We're very fortunate in a thousand ways, but replacing $600 iPads is sooo not in the budget.  And it had been  gifted barely 6 months earlier from my in laws (!).  AND it wasn't just a fun thing, it was for my daughter, the visual learner, and may even be her primary mode of communication someday.

I couldn't even talk about it.  I left The Boy in the car while I took his sister inside to her grandparents (whose eyes I tried very hard to avoid meeting) because he has never met a fact he hasn't shared and I just could not process my own guilt.  It was wholly my fault and it was such an asinine thing to do - my adrenaline is going again just writing about it.  I called Matt who drove as far as the onramp, but he didn't see it and said it wouldn't have lasted 5 minutes on the highway.  After the party was over,  I collected The Girl and we drove back up and down the highway but it was dark and still raining and we couldn't even find a debris field.

Then I drove up and down the highway a few more times over the next 48 hours.  Nothing.

But at 2pm today my phone (my free phone! why didn't I lose that?) buzzed and reminded me I had a DDS appointment.  Something had just exploded on my desk so I nearly canceled but I was a year overdue so opted for a little "me time" (at the dentist. whee.).  It was clear and dry out for the first time in weeks and... dammit if I didn't see something off on the shoulder of the road, a mere 2' from semis rumbling by at 70mph.

There were shenanigans circling back around (and around. and around) to collect it and I don't love y'all enough to have lingered for a picture of it on the ground next to the fast lane with said semis rumbling by but HOTSHITDAMN look what I found: 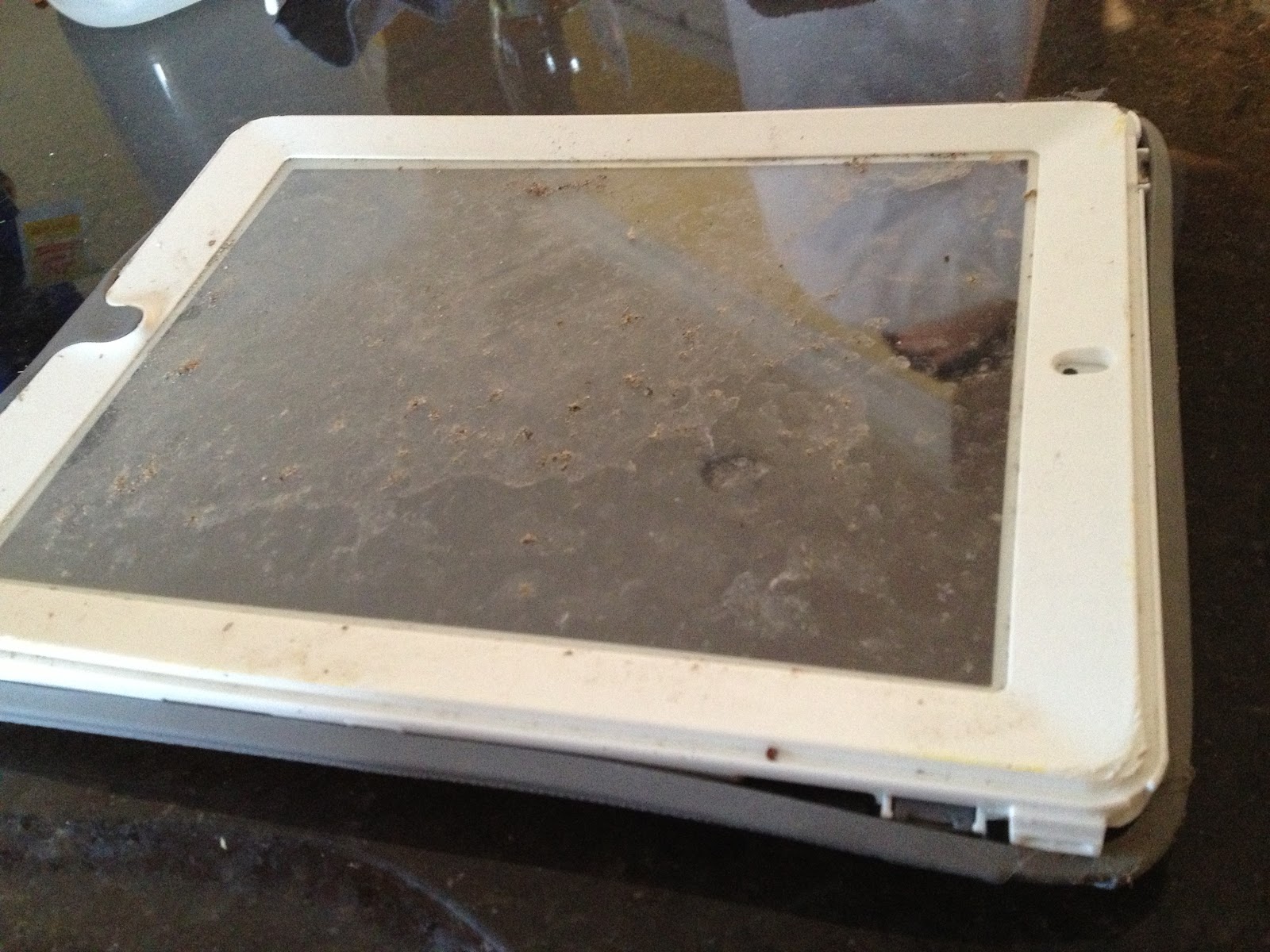 I got it home and hotshitdamn if it isn't FINE.  It's still charging and Matt thinks the touchscreen might be a little wonky but that would be repairable (maybe? yes?) with a few dry circuit boards or something.  Right?  I have no idea how they work but suspect iPads, magical as they are, weren't designed to sit in the rain for two days.  Nonetheless, I am positively GIDDY.  First, that thing stayed on the roof of my car in the middle of storm for over 17 miles.  Second?  It fell 5 1/2 feet at 73mph 61mph, landing on asphalt and the screen didn't even crack.  Yes, the OtterBox itself is mangled but it did its job valiantly and then some.  Fourth? What were the odds I'd find an 9x7x1/2" box along 20+ miles of highway?  MAGIC.

Note:  This is not a sponsored post.  This is a thank you note to the Otter people - Thank you for saving my pattootie, my girl's access to a bigger world, and preserving the peace and traquility of all future family functions. 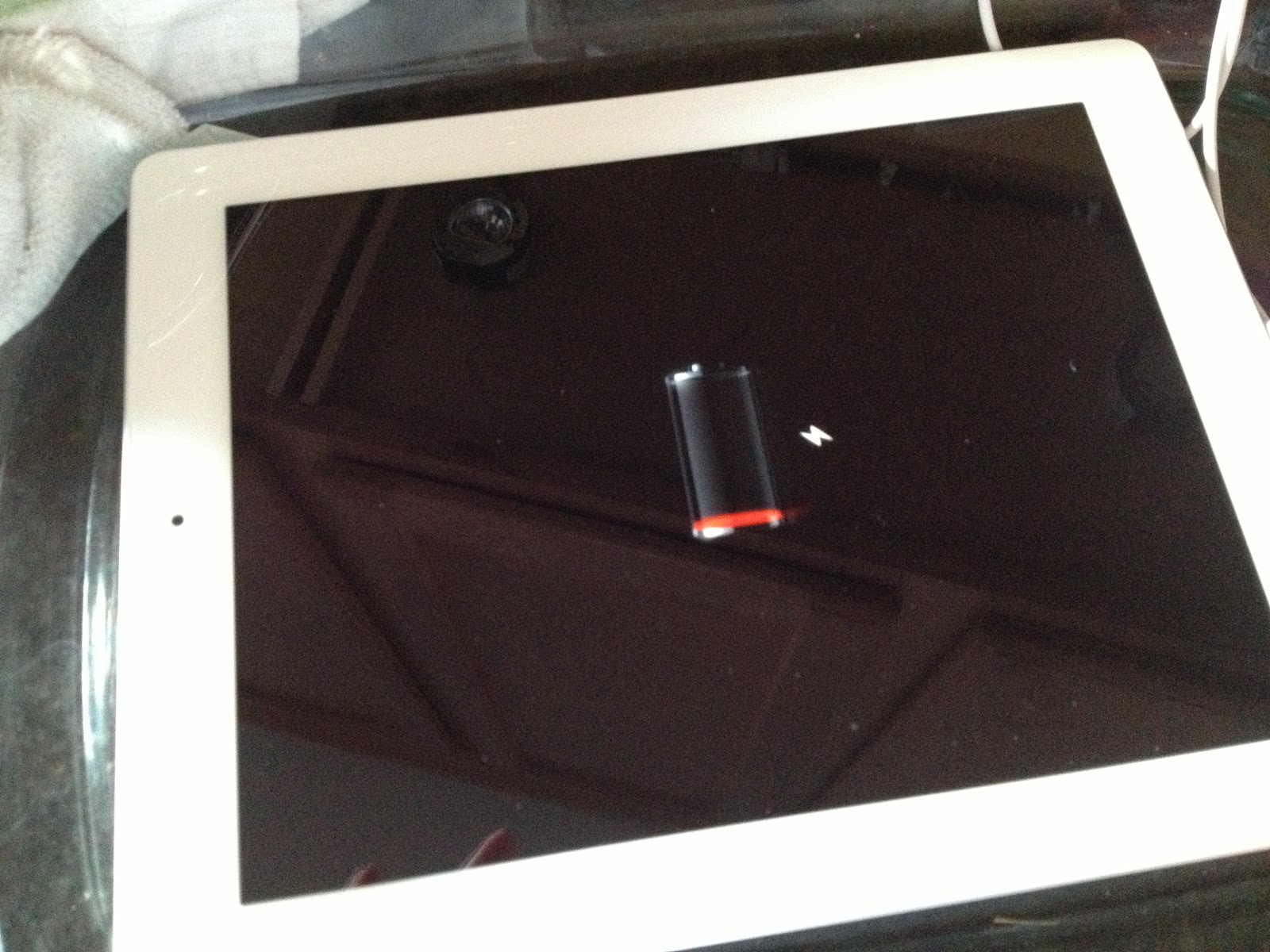 Otters in the rain
Rescued Mommy from her shame
Sweet apple, uncrunched.
Posted by krlr at 12:06 AM