If it's Wednesday it must be the washer leaking.

I spent last weekend in Indianapolis at my third NDSC convention and I'm only now coming off a high that's probably illegal in most states.  I love-love-love going to these, despite being a grumpy introvert, despite the money (though I wrangled grants this year!), and despite the emotional landmines I occasionally hit.  This year was no different.  I want to run thru some of the sessions on here but thought I should play a little catch up first.
We've had fun! exciting! events almost every weekend this summer - I went to Yosemite by way of a work trip, we attended Gigi's memorial in Nebraska and saw extended family (happily without the expected fireworks), the whole family played extras in a movie, we finally did the local Step Up for Down syndrome walk right (turns out mimosas are key), The Boy went on his first official Boy Scout camping trip and built a rocket, and we had some of my favorite weekend guests for July 4th (happily with fireworks!).

Each of these deserved its own post.  Sorry 'bout that.  It never happened because I've also been fighting the chronic, unwinnable battle of trying to get my **** done at work.  It's a 60+ hour/week job and I only have 40 hours to give it, which leaves me constantly frustrated.  And tired.
The frustration's compounded by the fact that something expensive is breaking around here every.single.fucking.week.  The best (but sadly not the least expensive) incident was when The Girl, who has taken to acting out her favorite videos with her dolls and iPad (adorable!), took the iPad into the tub (That she'd filled herself! Such initiative!) to reenact a certain Sofia the First Mermaid episode.  Turns out drying electronics in rice doesn't work.  At all.  The monitor on my computer then died in solidarity.  There were various other trips to the vet, optometrist, and thousands of dollars spent on the cars, only to lose first gear on one.

I still can't run on my effing feet, so I tried to tackle the garden to blow off some steam, but we live with heavy clay... and the $%^&* tiller stopped working. You gotta laugh, right?
Piling on, child care this summer has been patched together with scotch tape and old chewing gum.  My father in law has been a tremendous help with the gaps but I feel like we've over-imposed and my calendar of who's where watching which child looks like a NASA flight plan.  The Boy at least got to go to some YMCA camps but The Girl... did not.  Which is a whole 'nother series of laments I'll spare you.  Out of desperation we just signed her up for two weeks of hippotherapy camp, which I've always wanted to get her into and am a bit giddy over, but I'm going to be a kidney shorter by the time it's over.
I think I'm most frustrated with myself - all of this is just so much first world, (sinking) middle class bullshit.  I mean, hell, we had an iPad and cars to break, right?  I have a job I mostly enjoy.  Why can't I keep hold of the joy and let rest roll off?  How did I let a needy corporate America worm its way into my head?

Both my kids are healthy and thrilled to be spending so much time with their Papa*.  Matt's cousin's new baby was just diagnosed with leukemia and they've started a six month stay in hospital.  They would chew off their own legs to be worried about car transmissions and summer camps right now.

I don't really have a solution - this is just me wondering what the **** is wrong with my head.  Look at these pictures - it's like a magazine spread of Must Do Summer Fun (most of these photos are also the ones that ended up on FB - should we talk about people putting up a pretty front?).  Arghhh.  I miss running. 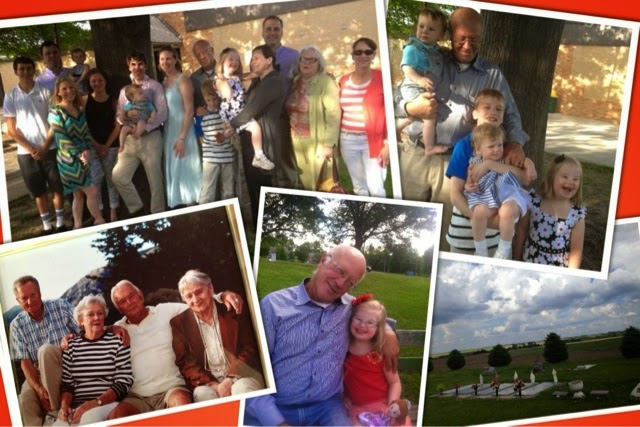 *I should clarify Papa Fritz is pictured here because we saw him in NE, he stayed with us for a week, & helped The Boy build his rocket.  I am horrified to discover I have no pictures of the kids and Papa Jim.  Sorry Papa Jim!!!
Posted by krlr at 7:10 AM