Two weeks ago I went with The Girl's kindy teacher to hear Patti McVay talk about inclusion.  If you have a child with special needs - any kind - you should listen to her.  Her presentation at the NDSC convention in Denver left me in tears and I started to get choked up again this time but pinched my arm and stared at my shoes till it passed.  She is a true believer in the power of an inclusive education - not just for those with IEPs but for the typical kids too.  She talks about how to make it work with behavior plans, modified work, para support, etc.  Listening to her it all seems quite reasonable, easy even.

She stressed and I have heard over & over again that every study ever done confirms the benefits of inclusion.

But I get lost in the details.  The fact is my daughter has an IEP because she has certain delays.  She needs extra time and practice to pick things up.  Her biggest delay, of course, is that she's effectively non-verbal and inclusion be damned but I would cut off my own arm if I could get her in 5 hours of speech a day.  I think the answer to that would be she's not going to learn to talk sitting in a back room with a bunch of other non-verbal kids, but she WAS in daycare and preschool with typical kids and the only thing she picked up from them were cold germs.  Be it motor planning or low tone, she's going to have to practice-practice-practice and work 50x harder than other kids to learn to enunciate.   She is using an AAC but in my mind little will affect her ability to be meaningfully included and to eventually live independently more than her ability to speak clearly.

But I have no idea how to make that happen.  She's already 6 - I don't know if it will happen.

And 5 hours of speech therapy/day does not make for happy, well-rounded children or fiscally solvent families so...  we're back to the inclusive class.  Thank God for Apple & Proloquo.

Going into this year, the school and I did try maximize her time with her peers.  We cut PT in half and what's left is push in, half her OT is push in (which the kindy teacher was thrilled about), and I think about half her speech is.  I think Patti would ask why it isn't ALL push in.  And she'd ask why The Girl is still spending time in the SpEd room.  (Or resource room. Or whatever the hell they call it).

At the workshop I asked what the SpEd teacher was supposed to do if kids were 100% included. The answer was co-teaching.  I have no idea what co-teaching looks like.

So I went out to breakfast again with the most fabulous SpEd teacher ever and asked, ever so delicately, what she was doing with my kid.  Last year this teacher gave my child a voice - she's the reason my daughter uses Proloquo.  Did I mention I love her?  This year she's teaching my daughter to read.  And do math.  But, most of all, she is teaching my non-verbal 6 year old to read.  Oh, my heart.

I have no idea how that happens.  I have no teaching credential or educational theories on my bookshelf but reading is right behind speaking on my list of hopes & dreams for my girl.  I tried to work with my son when he was making an awkward transition from "See Cat Run" to full sentences but only managed to frustrate both of us.  Then his 2nd grade teacher did something magic and it suddenly just clicked for him.  I don't think it will magically and organically click for my girl though.

One of the sessions I went to at this year's NDSC convention was on teaching kids with Ds to read.  The presenter opened with a story about watching the kid with an IEP get pulled out for "therapy" just as the other kids were sitting down for story time.  Which seems a wee bit counter-intuitive, even to me.  Inclusion, right?

Except she went on to say that she's never had a person (some were adults) not learn to read, but sometimes it took a LOT of practice.  Annndddd..... we're back in the resource room.

I laid out my angst on Facebook and the general consensus was that a little tutoring isn't a bad thing (also that calling it tutoring makes it sound better).  Which is the place I keep coming back to too, though I feel guilty for being OK with this knowing how hard other families have fought for a 100% setting.  I have no idea if The Girl's current SpEd/gen ed ratio is ideal for her.  I have no idea how long it will take her to learn to read.  But I DO know both her teachers care about teaching her.  I know that matters.  I hope it matters enough.

Speaking of books, The Boy and I just finished Percy Jackson, which had immediately followed Harry Potter.  We needed to give the magical superpowers a rest before Narnia or The Hobbit and I thought Little House on the Prairie would be nicely grounding.  My copies were given away years ago but I decided we'd skip the library & ordered the full set on Amazon.  I thought they'd be nice to have around... for both my children to read.  They arrived today. 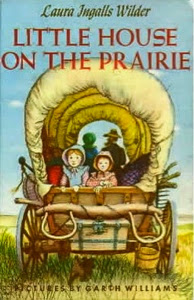