Membership Has Its Privileges

Yesterday I took The Girl 45 minutes into town to get her glasses repaired.  I was annoyed about 5 different things - not the least of which was that we bought her glasses, and the accompanying warranty, 45 minutes away.  The eye center is attached to the hospital… and right around a couple corners from the perinatal center, where we first discovered the extra bit of magic that was to enter our lives.  The Girl likes to run the empty halls on the weekend and invariably tries out this door.  I often think we should come back during the week and hang out.

Because, you know, advocacy.

Or maybe because I have a twisted sense of humor. 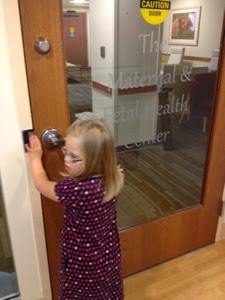 As we were leaving, a woman smiled at us and asked how old she was.  And while dealing with the gen pop is not one of my strong suits (talking! strangers!), something in her voice made me smile and slow.
"She's six."
"My son is… my son was…"
She faltered.

Her son was 50 but had passed.  She said he was a gift and touched everyone who met him.

Which was why I was hugging this unnamed woman three seconds after we met, and crying, and kissing my girl, who was alarmed and urgently signing "home."  The long drive and missed appointments and everything else gnawing at me was forgotten.

We joke about being members of this club, and there are hard things that come with it, but not much else will move me to hug complete strangers. 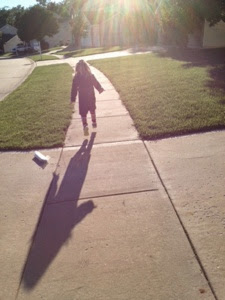