Temporary (I promise!) break from Disney

Last night Matt had to work late so I picked up the kids and then went to the post office where my daughter sprawled on the floor while I tried to figure out the automatic stamp dispenser.  You'd think with all the recent germs & sick days around here, I would have been more freaked out but Mommy just need five minutes to get this done and her brother's attempts to entertain her by listlessly singing the ABCs were even more grating.  So do we then head home to decontaminate?  Noooo....we go to IHOP!  Since moving to the midwest the Waffle House has actually grown on me but IHOP has a more effective advertising campaign and my son has been lusting after pancakes.  Not that we don't make pancakes every weekend but these?  Have colored sprinkles.  So as it got later, as the kids got hungrier & more tired, and as my patience and ability to warm something up in the microwave evaporated, I was easily swayed by the boy's "let's make tonight magic."  That his definition of "magic" meant IHOP is irrelevant.  That might even be their actual commercial.  I don't know.  If it is, I'm embarassed, but coming from a 6 year old it's damn charming.

Anyway, this extended rambling by way of long explanation as to why there are no Disney photos.  Because after his pancake, the boy tried to lie down in the booth & my girl was trying to crawl in my lap so we limped home and went straight to bed.  Me too.  I got NINE hours of sleep last night and it was glorious.

Instead I'm posting a picture of my daughter, taken by my SIL.  Obviously, there's always a lot of talk about genes, genetics, & what that extra chromosome means for our kids, but not as much about the influence of OUR genes on them.  This is my *exact* same picture taking face.  Which is (one of) the many reasons I don't post many of myself.  Outing my child, on the other hand, is totally fair game. 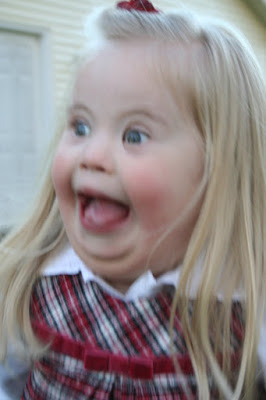 Labels: mom of the year