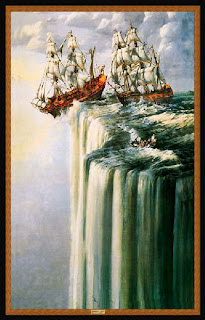 I recently finished both the Boy in the Moon and Schuyler's Monster.  I'd be a terrible book reviewer because with only a couple exceptions I didn't take notes or mark pages, preferring instead to just revel in the writing and the stories, both of which were remarkable and thankfully free of saccharine.  Both kids have incredibly rare syndromes and half the stories were simply finding a diagnosis - at one point Ian Brown said those with his son's condition weren't "large and politically powerful like that of Down syndrome".  Which I found curious considering all the second glances and occasional whiffs of pity we get, but on the other hand, the cardiologist we met with when I was still pregnant, immediately after learning my daughter's heart was missing critical internal bits, was downright cheerful.  He said, "We've completely revamped the way 'these kids' are taught and she'll be more productive than half the people in Missouri."  I don't remember if this meeting was after we'd already received our amnio results or if it was still just likely she had Ds, given the nature of her heart defect.  I know being "productive" may not be everyone's benchmark of choice but at the time I laughed and was grateful for the hope and feathers.  [And I don't think this was a commentary on Missourians specifically, though I've been known to mock their driving habits].  I'm even more grateful for that conversation in retrospect, now that I've heard about some less than cheerful [read: nightmarishly Kafkaesque] doctors' meetings.  Point being, both  her heart defect and her genetics were known quantities, addressable (if not "fixable"), and there were People out there already who Knew Things.  We were not charting unknown oceans alone - and when I was (finally) ready, the internet, buddy walks, and blogs were there for me.
After these books I again felt we are lurking in that murky space between the special needs & "typical" worlds, yet belong to neither - some delays and medical bumps but nothing unmanageable or particularly novel.  While I loved the book, I wouldn't be able to sit down over coffee to compare IEP notes with Mr. Brown.  Yet my daughter's Down syndrome isn't exactly the American Dream - it's "bad enough", in fact, that an entire industry has sprung up in an effort to give parents the ability to opt out.  It's the first & most obvious thing pregnant moms worry about and because of it, and losing Brennan, I try to spare expectant moms my presence at baby showers.  I imagine my appearance is sort of like the Ghost of Things Gone Wrong and during those parties I haven't managed to avoid, I try not to touch anything or talk too much, so as to not draw attention to myself.  I also find all that naive cheerfulness dangerous -  teasing fate - like the happy scene in the movies, right before the semi crushes the family's sedan.  Not that I'm superstitious or anything.  And yet, weirdly, I don't feel like we are the family squashed by the semi.  We're relatively happy, time & money shortages asides.
~~~~~~~~~~
Ian Brown also wrote that he uses the word retarded...

Sometimes I'll use it at a party and I can sense the person I am speaking to rearing back, however imperceptibly, at the sudden presence of what is supposed to be an unusable word; I can see him note the usage, and I can see him decide not to react, because he knows I have a disabled son:  he must think, well, if anyone can use it, he can use it.

I think he was being generous.  Or maybe Canadians are just more polite that those of us further south.  It might warrant a half-hearted apology after the fact if I shoot someone a look, but it doesn't seem to be as verboten as some other terms I can think of, especially knowing the number of times I've heard it from people who know my family.  To wit:  I went to girls night about a day after finishing Boy in the Moon.  One of my neighbors, in describing some gaffe, said she was socially retarded.  Worse, it was THAT neighbor - the one who thought she was going to be joining this community of ours - the one I mentioned in passing once in my whole long story that I'll link here because I think there are a couple new readers, but it's L.O.N.G.  so don't say I didn't warn you.  [She doesn't read this blog and I'm going out on a limb here to trust my SILs won't inconveniently remind her about it this week].  Anyway, I was close enough to hear her, not in the right spot for her to see my face.  I froze for a second and didn't say anything.  Partly because last time this happened there was, um, a scene (let no one doubt my ability to fly off the handle) and also because I'd just read the paragraph above and for space of one baby's heartbeat I thought maybe I was being hyper sensitive.
I wasn't.  Robert Rummel-Hudson used "retarded" in his book too, though I think he also wrote one of the best pieces on the word over here.  It's a goddamn shitty thing to say.  There is not a single context in which it doesn't immediately and specifically reference people like my daughter.  And there is never ever ever a situation in which it is even remotely acceptable to reference my THREE YEAR OLD in whatever asshattery you're muttering about.  That said, I'm not trying to demonize my neighbor.  Our kids play together and she doesn't complain about my dogs' barking, or the inadvertently converted prairie that was once my back lawn.  She brought us dinner once, after a hospital stay.  She'd also probably cry if I said anything.   …but I've also thrown up a non-neighborly extra tall fence in my head.
But this isn't about that word.  Or my reaction that night.  I think it's about community & isolation - my real one and my cozy little world online.  I'm not sure which is which anymore.  Because I was having a good time with the neighbors and then, after, I wasn't.  So I went home and got online where the people I read know it's a goddamn shitty thing to say.  The internet may be fraught with bullies and land mines but I've found a quiet little corner, with some other parents I adore, and have seen no trolls (so far). While our daughters might have different issues (ignoring the non-verbal bit right now…  Avoidance!  Try it sometime!), at one point in the book Schuyler's dad joked about buying an island for his family.  Which I've also fantasized about (who hasn't?)… but cutting off all outside contact might not be super healthy for the kids.  Killing off mommy's monthly night out isn't good for her either.  Cutting off every person who's ever been an asshat isn't realistic.  Because who hasn't been, at some point?  My children -both of my children- will venture out into the world one day, asshats and all.  It's not just that it'd be foolish to think I can protect them forever (I'm not sure how I feel about L'Arche, which Ian Brown looked into, but that's a post for another day), it's that I would be selling my girl short, worse than any name spewing jerk.  The scene Robert described at the mall, when his daughter got up in the mean girl's face and roared was awesome.  I've no doubt my daughter will roar as well.  He also wrote his daughter "still had a right to move through the world on her own terms".  True - If only I could maybe do a little recon for her and clear the path.  Throw myself on a land mine or something.
Posted by krlr at 11:38 PM