Last of the Randomness.

The ever lovely Starrlife posed some meme-y questions:

1) What is a favorite memory from childhood?
Starting off light, are you?  As kids, we were forced-marched up Mt. Tamalpais, which is probably steeper and taller in my head than in reality, but when we reached the top the folks would buy us ice cream sandwiches from the little concession stand.  There's probably a morality tale in there about hard work and reward, but I just really really liked those ice cream sandwiches.

2) If you could go anywhere in the world for a week where would you go?
Anywhere with a lounge chair and a nice boy to bring me drinks, rub SPF 175 on my back, and reposition the umbrella every 2 hours.


Completely unrelated photo.
We are sadly not heading off to any place with a lounge chair in this shot,
but you wouldn't know it from this kid's grin. 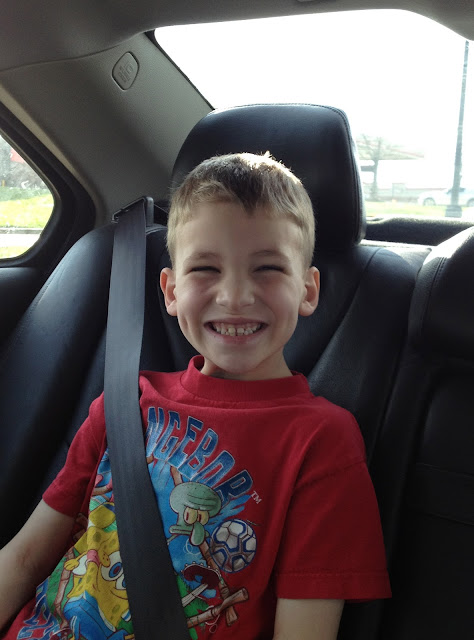 3) Some of your favorite two colors together/next to each other?
Periwinkle blue and brick red.  Saw it once on a little house nestled under some massive trees in Alaska.  It was charming.

4) What famous person would you like to spend time with, doing what?
My cabana boy, doing nothing except enjoying my lounge chair and umbrella drinks.  Then
I would write about him and post his picture on this very blog, where he would be seen by Uncle Mike, who would cast him in a movie.  He would then become rich and famous and remember me fondly, even after he later slid into drug use, cheap women, and his agent dropped him.

5) Why did you start blogging?
Ha!  I started so Gigi could get her great-grandkids' photos more often.  Then I started writing little captions.  Which grew into longer captions.  Then I abandoned all pretense and called it mine.  One of the best things I've done in a while - I love y'all and this little online community.

6) What is  your astrological sign and what trait can you most relate to/reject?
Gemini - the twins.  One more "Ha!"  I can't even begin to list all the contradictions and ironies in my life... Blogging, for example.  5 years ago I would have sniffed something about public narcissism.  Now?  I have my very own URL (well, Blogger loaned me one, but same thing).

7) Who was your best friend when you were in elementary school, tell us about them?
Gosh, I was such an awkward kid.  There was a whole string of girls but they were always moving or in a different class the following year and I spent a lot of time reading.  My mom, oddly, can rattle off all their names AND runs into their parents all the time.  That's not weird at all.

8) Describe your most transcendent experience?
Not "most," just the one time.

I must have been about 7 months pregnant and just found out my girl had Down syndrome.  Amid all the tears, I saw her.  And she was beautiful.  It was going to be OK.

Matt's the mushy one in this house and rank sentimentalism usually makes me itchy so call it insight, foresight, a sign from God, or some base mama bear instinct - doesn't matter.  It was magic.  I'll always be grateful for that moment.

Lucky girl.
Me, that is.  Because I have her: 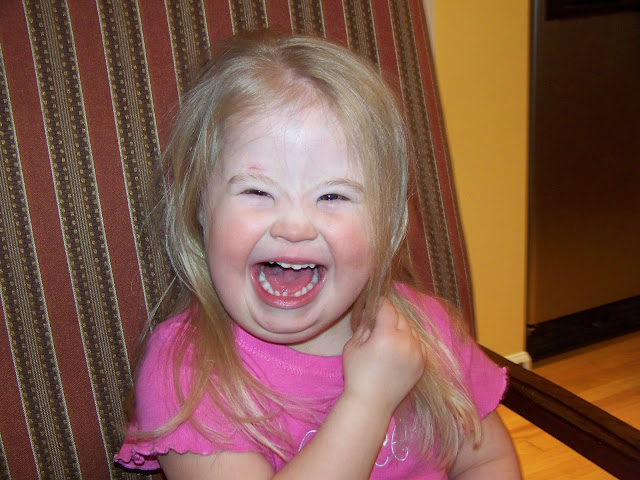 9) What was the first book that you ever remember reading?
The Old Man and the Sea.  No joke.  My dad wanted me to read the classics so in addition to the usual first grade material, he assigned Hemingway.  To a first grader.  Surprisingly, he didn't think I fully appreciated it on the first pass, so I had to re-read it several more times.  That I didn't turn into a rabid book-burner is one of the many mysteries in my life.

10) How popular were you in high school?
Not at all (see #7) - but it might not have been as bad as I remember it.  Ignoring junior high, which was eating-alone-in-the-library HELLACIOUS, I had a group of good kids I hung out with, I was usually dating someone or other, and I remember some fun outings - camping on the beach, school dances, etc.  One of the guys I dated now works for the same humongous company I do, which I discovered accidentally one day while reading some notes in a file.  Funny stuff.  That said, I have zero desire to ever attend a high school reunion.

11) Do you prefer white painted walls or colors?
There isn't a single white wall in our house so I think I'm going to have to say colors.  Pretty much any color - we have yellow, red, espresso, pastels - you name it.   My son's room is a deep blue with one construction-orange accent wall, to match his road sign decor.  It's enough to trigger a migraine but I love it.  We've been in this house 7 years though, and all the walls have been scraped to hell by tricycles, dogs, and the occasional flying lightsaber, so let's call them colored with a chance of drywall.