Update:  Still exhausted.  I fell asleep on the couch last night at 7:30 and was upstairs in bed properly asleep by 9.  After sniping at my husband for breathing.  In the same room.  I KNOW, RIGHT?  I'm such a charmer.  I may be flirting with a virus.  Or... A shrink might tell me this is some post traumatic depressive episode because of how I feel about April in general and this week, especially tomorrow, in particular but I am a [Familial name] and we don't believe in such emotional pishposh.

So we will continue with the frivolity and fun that is my MEME!

Eleven Random Things, Part II:
Yesterday I had the day off and thought I might have time to scrounge around in the basement for all my old Paris-Alaskan-LAPD pictures to scan them for yesterday's post (charming and organized!) but when I wasn't waiting in four different carpool lines I was barefoot in the kitchen making a pot roast for the family and...

7.  WW's zero point vegetable soup.  Because I started a diet on Monday.  Is that really a Random Item?  Doesn't quite measure up to "Hey, I used to be armed & dangerous!" but this is a real thing.  I'm 7-9# over the high end of my usual 5# swing, which is close enough to 10#, which is pretty darn close to TWENTY pounds over where I was last year this time. Which was still an egregiously large number over where I was in college.  UNACCEPTABLE.  I've only formally "dieted" a couple times post-baby - I usually just scold myself in the morning while on the scale, eat a salad or something for lunch, but then end up stuffing my face at night.  Every now & then I manage to not stuff my face after 5 and call it a good day.  Ineffective.  This time I stole borrowed a little notebook from work for a food diary, wrote down my goal weight, meal plan, etc.  I am turning.... ah hell, might as well say it... FORTY years old this year.  It's only going to get harder here on out.  I have scaled walls, gutted fish, and patted down a homeless man.  I can do this.
(Right?)

8.  The first time I met my dear friend Aunt Mary, I was yelling at her friend & high school classmate, my little brother.  I don't actually remember this but she swears it's true.  Her aunt used to be my next door neighbor when I was a little thing; later she was my 7th grade English teacher when I was going thru the most godawful painful pre-teen year ever.  She was very kind, even though I wore a lot of black eyeliner and Aquanet and never did my homework.  Given the probability we met at her aunt's pool when I was little (ignoring the yelling-at-brother story), Mary & I have known each other for 30+ years - though we didn't really become friends till she caught a ride with us on the way to my brother's (college) graduation and we stopped for ice cream.  The words "Dairy Queen" still crack me up, ten years later.

The first time I met my awesome sister in law, Auntie Em', I was also yelling at someone.  All evidence to the contrary, I'm not really an angry person.  Really!  Or maybe just not anymore, given the wisdom of my  almost *gulp* 40 years.  My brother and his then new(ish?) girlfriend had driven half way across the country to visit and had parked in someone else's spot at our apartment complex.  The renter of said spot became completely unhinged over the inconvenience of waiting 3 minutes for us to move his car - but I must have looked even more deranged because her husband literally pulled her back.  It had been a long day and she was being ridiculous.  Apparently I make an impression.


E & M - I love you both.
No yelling!
9.  If you are ever in a serious car accident, I will be able to provide you my professional opinion as to the approximate value of your spleen, fractured arm, or arthroscopic knee surgery.  No one ever asks, though, which is probably a Good Thing, but it limits my social usefulness.  Talking about such things at cocktail parties (because I go to so many!) is not encouraged so I end up doing a lot of smiling & nodding.  Donchya wanna be friends with me now?

I have a particular issue with motorcyclists and their body parts.  In the past 2 years, various riders have managed to misplace a kidney, a testicle, a left leg, and all movement in one right wrist.  Every time we pass a bike, I talk to my son about road rash and head injuries to program deep into his subconscious the horror that is riding along at 70 mph unprotected by sheet metal and airbags.

This is my favorite cartoon.  I'm probably breaking all sorts of copyright laws so read it quick before I get a cease & desist letter & have to take it down.  I should also get to work so... more tomorrow! 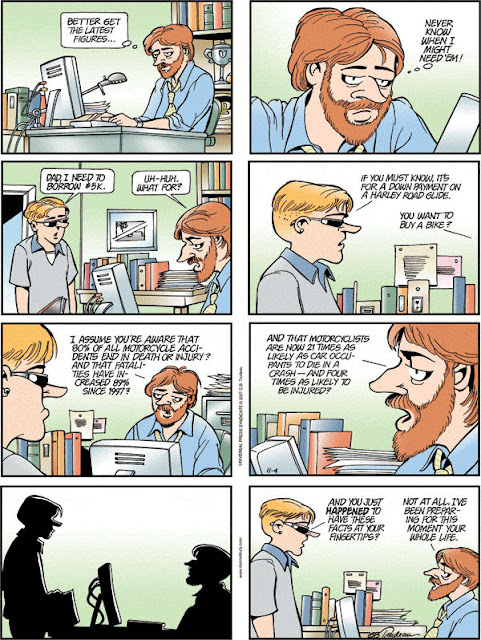