I've been in a bit of a funk lately - so much so that when Matt suggested a weekend away I actually sighed, and thought about all the laundry that would be waiting upon our return and all the extra money that could otherwise go to that neverending list of stuff that we need or need done.  First world problems, indeed.


It'll pass.  In the meantime, since I can't be bothered with a cohesive post (when can I ever?), I thought I'd clean up a few unfinished tales.


Remember when The Boy's school recommended speech therapy?  Because Mr. Chatterbox's R's and Th's were mushy?  And this recommendation came around the same time that I was fretting that The Girl hadn't yet said "Mom"?  [6 month update:  Nope.  Still hasn't].  It was really more funny than anything else because The Boy is a talker - last night he asked me what the "requirements" for something were while spinning some wild plans to build a robot.  He's 6 (at least for another month).


We nonetheless rolled into an IEP evaluation and after the comprehensive physical/social/cognitive/blah/blah walk thru, the school's SLP said R's and Th's weren't really expected for another year or two and he wasn't even close to qualifying for anything.  At 30 minutes, including the BS-y weather/traffic/coffee chit chat, it might've been the shortest IEP in all of history.  [And not that I'm complaining, but she couldn't have said that up front and saved everyone a meeting?].  Also?  Here's to failing!

A quick shout out to The Boy's teacher here - over this last school year she taught him to read.  Really read.  At the beginning of the school year he would unhappily fumble thru sounding things out and had a short sight word list but too many words strung together in a sentence and he'd lose interest, resulting in some frustrating and unproductive Mommy/Boy/book times.  And my efforts to explain the mysteries of English grammar were likely terrifying:  Well, son, the ai sound as compared to the ei sound in this particular subset of present perfect verbs*....  Now?  He reads EVERYTHING and has internalized the elusive power of the vowel - sheep/shape/start?  No problem.  He's even grabbing my fancy new phone from me to help during WWF.  If only we had another 'E' we could spell READER.  Not a problem buddy, I already have one.
*Totally joking.  I wouldn't know a passive subjunctive adverb if it bit me. 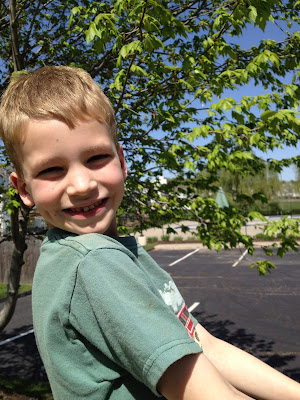 Also, reminding myself to remind myself of all the little happy things (HUnt the Good Stuff = HUGS  i.e. the worst acronym EVER), this was taken with my camera phone during the walk w/The Boy, above.  Geek out man. 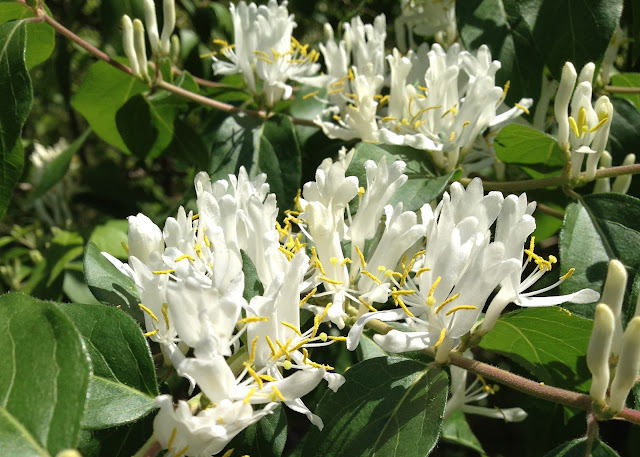 PPS.  Dear Readers - I cannot fix the line breaks or upload a cute video I had.  If this shows up 30x in your Reader because of my efforts to fix said line breaks, my apologies.
Posted by krlr at 6:13 AM