There are many beautiful tributes to mothers being posted online today.  This will not be one of them.  I and ALL of my maternal figures deserve pantheons erected in our honor, but I am going spend my morning lazing about, relishing the contrast between the deliriously delightful dizzying dash of days that is my life because of my children, and the quiet special day, devoted to my role in their lives, in which I will hide from them upstairs.

Mom, Gigi, and MAB will be getting calls later and I'll spend the afternoon noshing on BBQ with my MIL.  Tomorrow I will mail the cards my son lovingly crafted for them because nothing says I Love You like a card that arrives 4 days late.  [Speaking of which, we have an Easter card for Gigi too.  I'm totally putting both cards in one envelope because I'm thrifty like that.]

Today also more or less marks my one year Blogoversary.  This started off as an unsearchable photo-only blog but I quickly hijacked it and am now smitten with my virtual Mommy hour (or two - see below).  I never explained the title but this was to literally be a "Trial Run", as I started posting photos in April and wanted to see if I could keep it up before notifying the family.  I always thought I'd change the name but then decided that I'd keep it because this is your life, you only get one of them - it's not a trial run, make the most of it.  Which I heard in some form from someone at some point in time and which I took to heart. 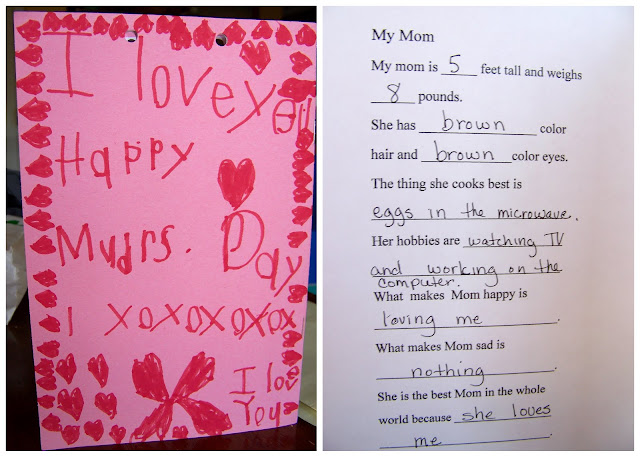 Adorable, no?  First off, LOVE that he's writing on his own now.  Being a Mudr sounds much more exotic than working-mom-in-the-suburbs, don't you think?  Maybe it involves hats.  Second, did he take a flier on my height or does his school have a creepy amount of personal data on me?  'Cause he got it right.  At least they didn't try to guess my weight.  He did not get my eye color right but his dad does have brown eyes so I will assume that his dad & I are doing EVERYTHING right (ha!) because he clearly thinks of us as one parental unit.  That he thinks the best meal I make is eggs in the microwave is ...disturbing.  Though unfortunately possibly accurate.  Last, also disturbing, is that my hobbies seem to consist of the TV and computer.  Apparently I need to get outside more - gardening, maybe? 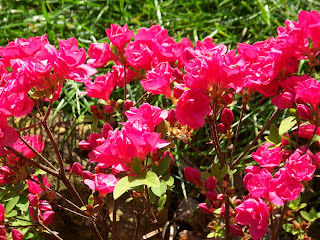 This is my azalea bush.  Pretty!  There are two of them.  We would need about 150 more to fill the empty spots in our backyard.  Maybe I could put the kid to work weeding....  because this is his competition:


What mother doesn't wish for a laundry fairy?  [Sorry I can't rotate it for you].  I am a clearly fabulous mother and not only do I deserve a laundry fairy, I have clearly instilled a strong work ethic and sense of tidiness in my children [insert joke about child labor laws HERE].
Happy Mother's Day to me, and mine, and to you and yours.  And a special note to all the mothers who are no longer with us, to stepmothers, adoptive mothers, birth mothers, and my German host mother senior year of high school who I did not appreciate at all but with the wisdom of my many many years, I now know was also awesome.  And Happy Mother's Day to my husband, since he played a... role in this too.
[Resisting the temptation to describe the role Matt played in this.  Since this is a family friendly space].
Posted by krlr at 10:00 AM