Headlines like that are why I avoid the local news.
Anyway... last night I checked on my girl and found this.
Believe it or not, her room had been clean. 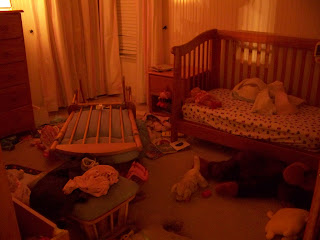 She is a WILD sleeper.  We'll find her in any number of places  - in corners, in the closet, in the little toy tent you can't see in this picture, in the rocking chair she unmanned here, and often in the bin at the base of her bookcase with all her stuffed animals: 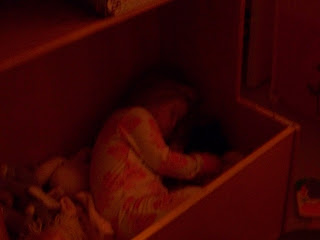 Nice.  No, we don't normally keep our child in a box.  Also, my camera battery died before I could play with the low light settings so apologies for the lousy shots.

She had her sleep study Thursday night.

This was my plan:  Unable to fold laundry or wash dishes I would curl up into one of those comfy hospital recliners and start my new book while my sweet little girl peacefully snored away nearby, monitored by the mid-west's finest medical professionals.  I even had snacks stashed away.

Believe it or not, I'm not actually on ANY medication.  The reality:  She didn't like the little electrodes and she really didn't like the glue they used in vain attempts to affix the electrodes.  There were tears and wailing.  It took her an hour and a half to fall asleep.  Then she slowly pulled off all the electrodes as she thrashed around and played with her hair in her dreams (her hair obsession is a whole 'nother post).  For some reason, unlike every other sleep study I've read about online our center didn't have caps (hairnets?).  So the tech would come back in - I don't know, every 4 minutes? - to re-affix the electrodes.  Which would wake her up.  See also, above:  LIGHT SLEEPER.  Till finally at midnight the tech came in and said that she'd pulled so many off they weren't getting any useful data and they were going to have to re-affix ALL the electrodes.  Which REALLY woke her*.  And, oh dear gawd, it took her TWO hours to fall back asleep.  There's nothing like getting annoyed with your perfectly calm and happy yet WIDE AWAKE three year while you are on camera and mic'd to really really feel like Mother of the Year.

[*Note here about the overnite tech - she hadn't liked the girls when we checked in but the tech at midnight signed beautifully, asked her to "help please" and she immediately settled down.  Ah, the power of communication.  I think I could have done a much better job walking her thru the process earlier with the girls.  Maybe attached the wires to her dolls first.  *sigh*  Am not winning any MotY awards here!]

Finally in desperation I turned on Signing Time and fell asleep.  I think she eventually fell asleep but by 2-2:30 in the morning I was defeated.  Bested by a 3 year old.  We were there from 6:30pm-9am and they said she got about 5 hours total.  There's a very good chance we'll have to get it redone (Wave hello to Daddy, sweetheart!).

Also, in one of life's massive ironies, because she'd been home with me for a week during the Family Flu, and not in daycare, her constantly running nose had cleared up.  So there was minimal snoring which had been half the reason we were there.

One of the techs asked me how much sleep she usually gets.  HA.  I shrugged & told him she was the second child.  He laughed and said he had three of his own.

For those of you who don't know what I'm talking about:  When my son was a wee babe, and I was away all day at work, I considered it the least I could to stay with him, after bath and books, till he fell asleep.  It was our time to bond and damn the experts, what's the harm?  Well, he's six and a half now and while he doesn't come in our room every night, I still have to negotiate to leave his room after the stories are read.  Sometimes, little white lies are even told - Yes, I'll come back after I've had a glass of wine done my chores.  Hoping against all hope he'll be asleep by then.  It's really only been in the last year that he's stayed in his room all night.  And by "all night" I mean till the gloriously late hour of 4am.

Then he comes in our room and snuggles.  And by "snuggles" I mean he takes up 75% of the bed, all 6 pillows, and the king size comforter.

When my daughter was smaller, after her heart had been fixed and she'd graduated out of the bassinet and into her very own crib, behind her very own door, we made a conscious decision to NOT make the same mistake.  So she gets a bath, books, and a snuggle.  We tuck her in, arrange Mr. Lion, Mr. Tiger, Baby Doll, Dollie, and -recently- Doggie (fountain of originality around here, we are), turn on her spinning flower nightlite and we CLOSE THE EFFIN' DOOR.

That she plays quietly in there after "bedtime" is of little concern.  She's safe (though the rocking chair has been wounded) and she's learning a lesson of incalculable worth - to go to sleep by herself.  I suspect we'll have to backtrack a bit when she figures out the door handle thingy, but in the meantime there is precious, precious, precious sleep.  Without little feet kicking me in the face.

That this arrangement leaves me under equipped to answer the sleep tech's questions is, well, I'm OK with that.  We're not completely oblivious - we know it takes her a LONG time to fall asleep, and that she ends up in strange places like her toy box, and when I sneak in late at night to move her back to her bed, sometimes stars are born and die in that time between breaths, but we were kind of hoping the professionals could tell us what was going on.  You know, something more insightful than, "She's sure not sleeping much, is she?" A girl can dream.
Posted by krlr at 11:10 PM

Labels: health, mom of the year