The background:  My dad has a thing for Artic explorers and my two brothers have been named in honor of certain outings.  This is the Resolute: 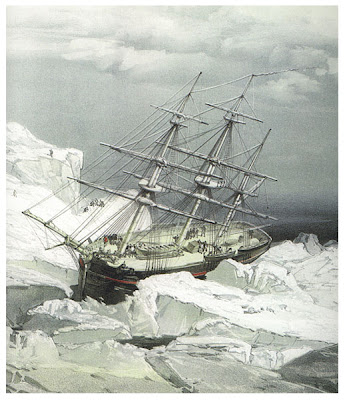 She became icebound and was abandoned in 1854 but the ice eventually released her and she drifted off into the open ocean where she was found, returned to England, then later salvaged, turned into a desk, presented by the Queen of England to US President Rutherford Hayes, and ultimately played a not unimportant role in a Nicholas Cage movie.  [A potentially ignoble end, depending on how you feel about Mr. Cage.]

More background:  Office holiday lunch of 25+ assigned to one severely besieged waiter.  He was so overwhelmed at one point he actually hit his own head - because he forgot someone's tartar sauce (despite 4 requests, but not that I was counting).  I, for one, was a little uncomfortable and no one lingered over coffee and dessert because it seemed a very real possibility he'd start crying if we asked for more cream.

A few days later I stayed up till 1am making cookies for all eight of my daughter's teachers and therapists because at 3 in the afternoon, cookies had seemed like a cheaper more thoughtful gift than yet another Starbucks gift card.  I had the TV on and ended up watching Black Swan.  I decided I should probably do something about my stress levels before I end up hitting myself in the head or hallucinating.  On the bright side I decided it's not that bad because I haven't started hallucinating ...yet (though, speaking of New Year's resolutions, it's funny how blurry those numbers on my scale are).

Then I had an absolutely lovely week off wherein I read BOOKS.  Real books, with pages and chapters and multi-syllabic words.  Oh! The luxury!  And I did not clean the garage or the basement, or frame the dozens of photos I've been stockpiling for years, or cook and freeze meals for my return to the real word, much less do laundry... and it was marvelous.

Then my girlfriend reminded me of a funny story involving a friend of hers whose house was in such disarray there was literally grass (the stuff of lawns, not of hippies) growing in her bathroom.

So.  I have decided that I am doing the very best that I can at work and at home and I can plow through the ice without getting stuck or whining about the enormity of it all or worrying about what isn't getting done.  I will be fully engaged and present where I am, and be undaunted by the rest.  Because we're a long way off from crying over tartar sauce or having to mow the bathroom floor.  And more importantly, because I don't want to end up drifting aimlessly out to sea and miss it all.  And by "all" I mean the two very special little people that are my heart & soul and the reason there seems to be 3 loads of laundry a day.

I read about Ms. Elizabeth's small stones and while brevity has never been my strong suit (no kidding, you say!), this seems like an excellent avenue to document the little joys that make this damn expedition worthwhile.  Except this is going to be my little happiness project, rather than beautiful prose, and I might just throw a picture in there instead.  Or a bad haiku, like tonight.  Because my other option was the photo-a-day project that one of my very favorite people on the internet spawned, but I might do that next year instead when I have a nicer camera and it's no longer what all the cool kids are doing.