The Definition of Insanity

Spending the weekend being torn about spending quality time with the kids, minimizing the domestic filth, feeling guilty about time you should be working, while concurrently neglecting items #1-3 because you're trying relax from all the stress of not doing items #1-3 by spending too much time on the $%^&* computer reading about other people's quality moments  ...is not, by definition, a super fantastic way to spend 48 hours.  So my new motto is to just embrace the chaos.  That should get me through Thursday, at least.

Also, in my online meanderings, I was reminded again of the fact that my kids will neither remember nor care that the floors were clean.  They will remember making fresh squeezed orange juice: 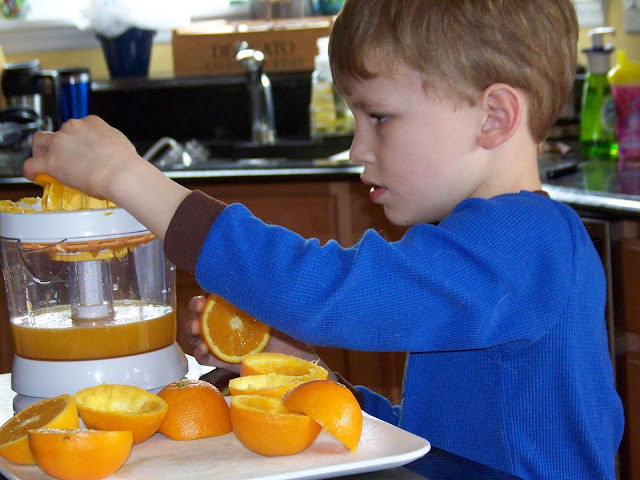 (bizarrely, one of this guy's favorite things is the juicer.  We make a LOT of lemonade in the summertime).

He may or may not remember riding his bike on the sidewalk while I fussed in the garage and then got on his razor-thingy and nearly broke both it and my neck.  Pretty sure those things have a weight limit.  They should probably have an age limit too.

With any luck he will NOT remember opening the door and letting this one out.
﻿﻿Who despite being effectively a three legged dog, thanks to a torn doggy-tendon, can move like lightening should the opportunity present itself.  One of our neighbors luckily came to a very very hard stop, thus eliminating the potential  memory and presumed life-long guilt of letting the dog out only to watch her be immediately smushed by a SUV.  Though I will confess I was furious (because said neighbor came to a very VERY hard stop) and sent him inside for a time out because we have told him a gazillion times to be careful opening that door and I was incensed that he nearly created the aforementioned lifelong guilt, and also because I happen to like the middle dog quite a bit.  And also, the vet bills.  Because after running up $10k in car repairs and annual health insurance deductibles in two months, the real cherry on top of that mess would be the doggy ER.

This one took a long late nap and woke up cranky so we didn't get to the park but I think we will today.  Two weeks ago it was ten degrees; today it's supposed to reach 70.  I'm sure it won't be crowded at all.