[edited to add:  An entry for my west coast peeps.  Anyone on the east coast, who has already posted pix from the last storm of snow up to their eaves, has permission to skip and/or roll their eyes at the unnecessary drama & repetitiveness]

Even though I've studiously avoided the news lately, it was hard to escape the WEATHER!  OMG, THE WEATHER!!  There were people huddled in small groups whispering all day yesterday at work, especially after the Nat'l Weather Service warned of a "crippling winter storm event".  I spent a long time in SoCal, whose fine weather-people had the hysterical habit of announcing an inch of (admittedly rare) rain as Storm Watch 2000!  And while I'll admit the midwest weather is more extreme, I haven't always been convinced it merits the sixteen exclamation points and ominous music. 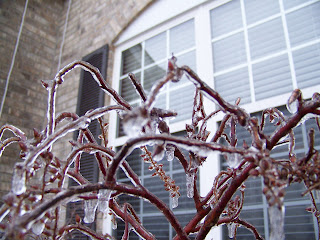 But they promised ice this week, and 1-2' of snow, and maybe even whiteout conditions.  They also said there'd be strong winds -after- the ice freezes on all the trees no one bothered to trim back from the power lines, all but guaranteeing we're going to be sitting around our fire tomorrow night, huddled under blankets, wishing we'd remembered the marshmallows and graham crackers.  And maybe a generator.

I trust some paper pusher somewhere has done the math and compared the cost of burying all the power lines around here to the cost of all the tree trimming (well, no cost there since it apparently doesn't happen enough), and the emergency crews, and lost revenue as people sit around huddled under blankets wishing for s'mores and for the ability to run up their heating bill?  I'm guessing that the preventing-huddling-under-blanket side of the equation lost.
Anyway, despite Workathon 2011, after increasingly dire phone calls from Matt yesterday I packed up a box of files and bailed out early.  And despite mocking the weathermenpeople, I really really do not like driving on ice, nor do I want to be anywhere near any other members of the unwashed masses while they are driving on ice.  Two kids, no wish to leave my children motherless, can't afford new car right now, blah, blah...


I have remote access so will diligently get my work done today from home
[Oh yeah?  How's that working out for you so far?  Mirthless laughter] 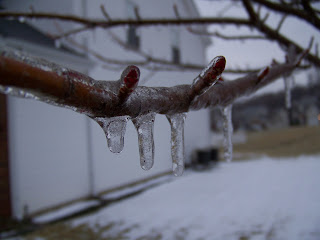 For the benefit of my CA brethren, I thought about live-blogging the storm.  I pictured something like:
7:04 snow.
7:42 snow.
8:12 snow.
See?  Scintillating reading!  But since it's supposed to be the oh-so-crippling snow PLUS ice it might look more like this:
8:37 sleet
9:03 sleet + fluffy white snowflakes
9:24 snow.

I will say I let the dogs out this morning and the aforementioned sleet + big fluffy white snowflakes made for a fairyland.  The sleet hitting sounded like tall grasses in the wind.  It was magic.

Magic with s'mores would better though. 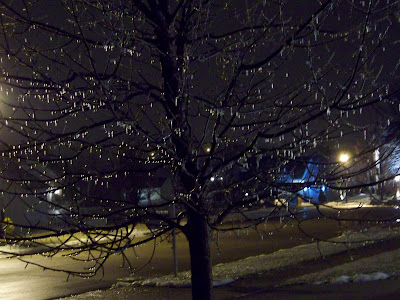