Because you haven't had enough schmaltz lately 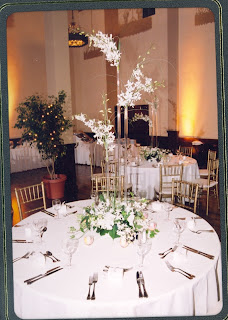 It might have been a dark & stormy moment in my head, the day we got married.  I remember not being overly into the various details leading up to the day, but I was very excited about the flowers. And the room. And the champagne chocolates in the specially ordered boxes...  OK, maybe I was into it a leeetttle bit.

But I consider myself a simple girl (Oops!  Hold on - Matt's choking on something)  ...and I did not want a glittery bedazzled fairy dress.  I wanted something simple and after multiple stores told me how much they were going to charge to remove the bedazzling, I thought it'd be easier to have something made.  My stepmom actually found her - a nice older Hispanic lady who'd been in business for a gazillion years.  [No, I don't hold this against you, MAB]. We interviewed her, checked out her other wares, pulled on stitches - perfect!

Except about halfway thru the dressmaking process she retired. And left her store to her daughter. Who, shall we say, was not vetted. I'd call asking if maybe I shouldn't be due for another fitting, or something?  Yes?  And they'd say Sure! Come on in!  Except there'd be no new stitches sewn.  As we got closer to the big day I became more worried, and made increasingly frantic phone calls to them, as I'd blown my budget on the flowers and what the heck was I going to WEAR?

My memory might be a bit fuzzy here, but we started the process at least 9 months, if not a full year early.  She did not have the dress ready till TWO DAYS before the wedding. When I picked it up it wasn't ironed (what? are they suppose to do that?) so I didn't notice The Wrinkle.  I got it pressed, tried it on the Night Before and there it was.  No one else (admitted they) saw it, but the damn thing did not FIT.  There was a big-ass WRINKLE on my boob.

[Also?  The sleeves kept falling down, the edges weren't finished at all (because all my guests would be checking out the underside of my skirt?  What kind of wedding was this?!), there were some HUGE unnecessarily-plumping roses on my butt, and mid-way thru the party I had to safety-pin a piece of boning that was literally making me bleed.]

Keep in mind I picked up the ironed dress something like 19 hours before the wedding. And.I.lost.my.mind.  Everyone makes fun of Bridezilla*.  I'd been SO careful - do we invite everyone to have fun with us?  What if they think we're gift-trolling? What if they're offended we don't invite them?  I had tried so hard not be That Girl, only to turn into a raving lunatic with less than a day to go.

*I also confess the bridesmaid dresses were UGLY AS SIN but I've since apologized to the victims and my sister has agreed not to escalate the crime by seeking revenge (I get to wear a LBD to her wedding).

But on the Eve Of, frantic calls were made. My stepmom bribed someone to open their shop to exam The Wrinkle but she sadly shook her head.  The entire bodice would have to be resewn.   She could not do in the next two hours. Crying did not change her mind. As I was getting the hairs done, I developed a plan to simply stop by Nordy's to buy a white suit.

The only reason I didn't is because someone took away my car keys.

I ended up wearing the damn thing only because there were no other options.  But it generated lots of Very Awkward photos with my veil casually draped over the Offending Bodice Wrinkle.  When my sister was out last month I hauled it up out of the basement, just for giggles, thinking it all might've been in my imagination. Nope. [Though in a little hurrah for me- it still fit, 3 kids later and ___ years later!] 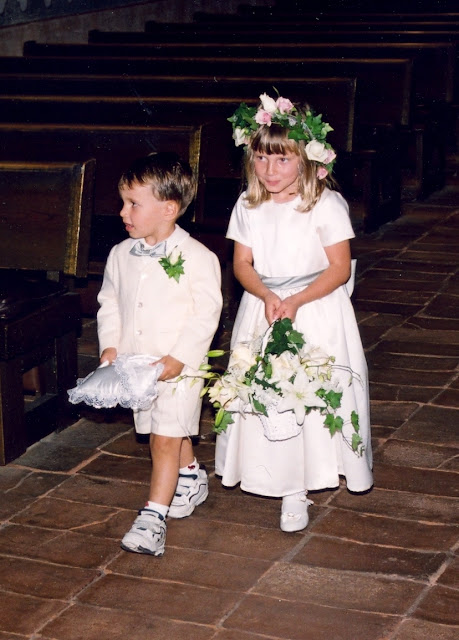 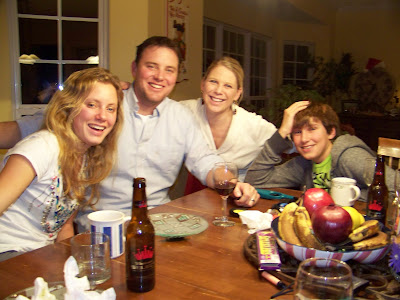 So no need to do any fancy math about the intervening years.
Anyhoodle...amidst all the Drama about the dress. [Which no one EVER admitted to understanding.  Blind!  All you people are Blind!!!], I let something slip my mind.

A little something.
A token.
A small symbol, if you will...
A sign of our commitment, love, and vows...

(is the tension building?)

I FORGOT THE WEDDING RING.

I did not realize this till we were actually AT THE ALTER.  It was straight out of Four Weddings and a Funeral.  I started sobbing - with joy, no doubt, thought our guests.  Matt's jaw muscle was twitching. I was seriously concerned he'd just walk out. I mean, seriously, how would YOU feel? The deacon tried to get his ring off, but we were 20 years and 50 pounds too late.  Matt's brother misunderstood all the commotion and pulled out his Altoids to avert the apparent coffee breath crisis. My sister?  Useless.

So we faked it.

After the mass, while en route to the flowers reception, we swung by our apartment and I ran up 3 flights of stairs in The Wrinkle to retrieve the special box I'd conscientiously stashed away in a Safe Place several months earlier.  Matt forgave me and we all lived happily ever after.
The End.
Happy Valentine's Day Babe!
I'd marry you all over again.
﻿﻿ ﻿﻿
﻿﻿
﻿﻿
﻿﻿