I resisted the urge this morning to tweak last night's post to add even MORE things I've reversed myself on and/or am a complete raging hypocrite about but I didn't get a chance at work (because of the, y'know, WORK) and then thought if I did one big round up post I would A/get it all out and hopefully be done with it, and B/ it would be a great excuse to post a picture of my FABULOUS NEW SHOES.  Because when I pick up the kids from their various minders on days both Matt & I work they are grubby, grumpy beasts not fit for permanently posted pixelation, so I might as well photograph my shoes instead.

~~~Family dinners.  Yes, critically important for family bonding, maintaining communication with your child, teaching them not to eat with their feet, ecetera.  Except we don't.  Cereal, eggs, & quesadillas are the norm.  I give myself high marks if I make veggies but then still end up on the computer while they eat.

~~~TV.  I've no doubt every new parent agrees TV is the devil's toy, till their kids get a little older and you aren't sure when an hour of educational Sesame Street morphed into "two" hours of SpongeBob.  "Two hours" should, of course, be read liberally -  i.e. 2 hrs 59minutes.

~~~Wine.  I rarely drank in college and if I did it was hard alcohol mixed with bubbles & high fructose corn syrup.  Now?  Necessity.  Stuff of Life.  I could go on, but would start to sound like I had a problem.

~~~Also, coffee.  I drank tea in college.  Earl Grey. Hot.  [Still no Trekkies?]  Now I get a caffeine headache if I don't dose up with at least three cups.

~~~The kids.  I really did not think I was going to have children.  The world is over populated, blah, blah.  Now I want a herd.  Or maybe a litter.  A small litter?  Though adoption is a serious post for another day.

~~~The suburbs.  *sigh*  For the record, we don't own a minivan...yet.  Also filing under this category:  getting married (in general, not specifically not to Matt), the working mom/SAHM debate, and flying with small screaming children.

~~~The shoes.  That's what you were waiting for, right?  Though I told a friend I was going to post a picture of my shoes and she mentioned she had "4 inch gold sparkle platform cork heels", so these suddenly seem dull in comparison, except she doesn't have a blog or a photo of said shoes so, ha-ha, I win.

Did'ya know I spent my first 2 years of school in Paris?  I did.  Making my eventual transition to the mid-western suburbs that much more dramatic.  After running out of money, I finished up at an ag school in the middle of nowhere, surrounded by tomato fields.  (Yes, I did get culture whiplash).  And, yes, I do realize that the fact I was there for TWO YEARS without appropriately reveling in and partaking of the fermented grape is a tragedy.  I also never learned how to speak French.

Worse, and possibly criminal - in the fashion capital of the world, I wore a lot of shoes that looked like this:
In my defense, there was a LOT of walking around.  Though the pretty French ladies seem to manage just fine.  Must've been all the wine they were drinking. 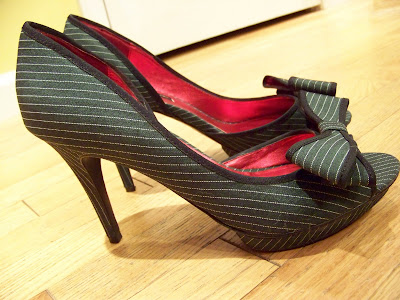 Though it naturally rained the first day I wore them, which might not be the textbook definition of irony, but that one song made it OK.

~~~~~~~~~~~~
Days later:  Am adding blogging to this list.  I'm not on FB, linkedin, myspace, second life, the message boards or any other online option.  I LIKE(d) my online anonymous browsing - there are crazy people out there.  And Employers.  I didn't like high school the first time around, no need for random people to google you, to remind you about second period history.  But here I am...