The night before last I had a lovely evening at a wine bar planned before the oncoming Throat of Fire made me the least fun girlfriend ever.  Sorry *yawn* /shiver shiver/ you were saying?  But before I picked up my friend I did what only a month ago was unthinkable...


The book fair drop off was at a loading dock deep underneath the local mall.  Little creepy and too behind the scenes.  I worked one summer at EuroDisney when it first opened (might be dating myself there) - same rabbit warren feel.  I expected my 7 boxes would be a decent addition but they were barely noticeable. 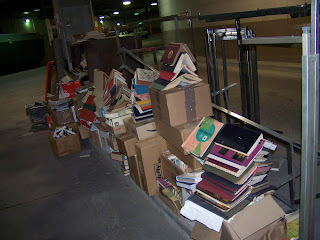 All those books just left there - Abandoned. And, worse, weirdly stacked, breaking their spines. Not to be overly dramatic but they seemed desecrated.  Callously strewn about, like so much trash.

But not really, they're going to a good cause.  To be read again and re-enjoyed. Phoenix rise.

I gave one other box of all my Latin American lit to a friend - Gabriel Garcia Marquez, Borges, Pedro Paramo, Isabel Allende, etc.  And Julio Cortazar - Hopscotch. I'd read this during spring break one year.  I remember my roommate was off working so I was alone during the day.  The details had faded but I still remember that week of soul sucking emptiness.  I just checked Wiki for the actual plot and, um, yeah - won't be re-reading that one.  But really, D, it's a GREAT book.

I also gave her some lighter stuff too (Amy Tan, B.Kingsolver, etc), lest it all be Too Serious. I think I did at least.  The stacks and boxes got a little blurred at the end.

To the book fair I gave a whole bunch of cheapy "airplane reads", history books, and lots & lots of random novels which may or may not have been read and/or appreciated, either by me and/or the critics at large.  I resisted the temptation to pilfer through the stacks and stacks of books already there, but did notice someone was also giving them a copy of Seeing (Jose Saramago; which I did like. Thought History of the Siege of Lisbon was fabulous).

I sent Half Baked back to my mom who'd sent it to me originally.  I have more to say there but it'll have to wait (beautifully written, btw).

I kept some random Serious books that I always think I should meant to read but never got around too.  [ed. but forgot to upload the photo. Doesn't matter.  Let's just say not light reading, but without the pretentious photo since I've probably owned them for 10 years and haven't read them yet].  Don't even think they're left over from school, just random pick-ups (I also worked for a book store for a couple years.  The dollar bins were always too good a bargain to leave alone). The Bob Woodward book from my brother (so I'll definitely read that one first). Also kept my Bloom County collections, some sentimental books (including How to Knit, in German.  From senior year.  Because that's sure to come in handy someday). Kept To Kill a Mockingbird, obviously. Though it's unclear why I have, and kept, two copies. I resisted the urge to burn my high school yearbooks.  Also on the list of retained oddities:

Tom Clancy, Debt of Honor. I kept this because I'd randomly picked it up for a plane trip not long before 9/11.  It was eerily prescient.

All my Dick Francis books.  Starting reading him in junior high?  Some of these are, shall we say, no longer politically correct?  Definitely in the airplane read category.  But the lead guy (always a guy) is so stoic. That's appealing (to a 13 year old).

Bartlett's Familiar Quotations.  It strikes me as cheating a bit. A true bibliophile would remember the line and the source without needed a reference guide, right?  I remember I bought it right after we lost Brennan because I couldn't find the words, otherwise.  Picked  "God's finger touch'd him, and he slept."

Tennyson.  Because of the line above.
Also, my dad's favorite lines, quoted ad nauseum:
Made weak by time and fate, but strong in will
To strive, to seek, to find, and not to yield.

I actually like Invictus better but the movie kind of took that away. Can't really compete with Nelson Mandela, now, can I?
I thank whatever gods may be
for my unconquerable soul.

Proof I actually unpacked the car 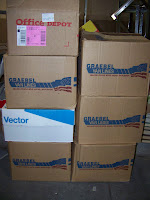