As part of his Special Week at school, the boy gets to bring home a bear, cart it around, take pictures of it in incriminating positions doing interesting things, and then report back to the class in a special album.  He's very excited about it.  The Book of the Bear's Year is very, very CUTE.  Crafty, even.  Bear's previous photos are cut with special crafty-scissors and festooned with ribbons 'n stuff.  This is one of those times I'm very glad we didn't go first - so I can blatantly cop the other mommies' ideas.  This is the downside to being a city girl in SAHM country.
(for Gigi:  SAHM = Stay at home mom]

The boy and the class bear: 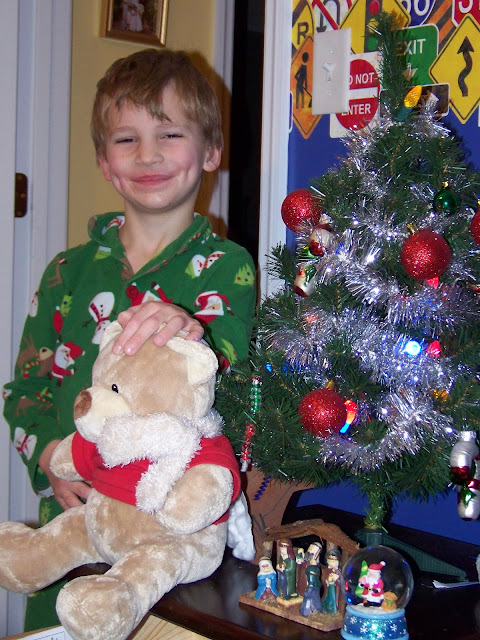 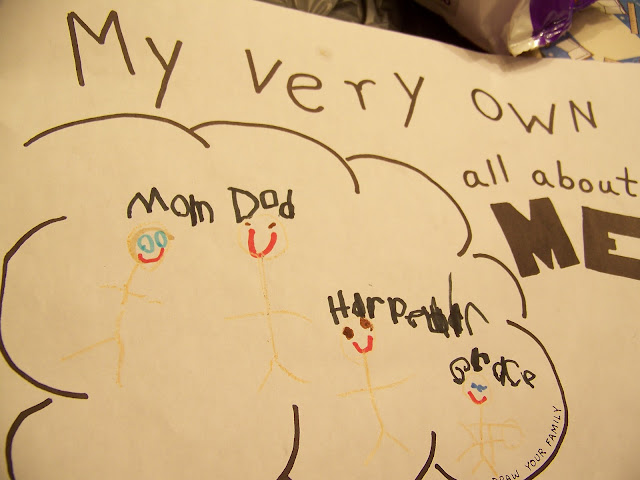 He also drew a picture of his family.  Not his best drawing as his interest was flagging (he really does know how to write his own name).  But he commented that his daddy's eyes "looked Chinese".  I'd just read this post - which caused me to ponder the downside of my kids living in the Whitest Town Ever (in addition to being out crafty-fied by the SAHMs) - so I asked him what he meant, if there were any Asian kids in his class, etc.  No real answers and he hadn't said it in any particular way, just sounded like he was making an observation, so I let it go.  We're obviously going to need to address differences so am operating under with the "everyone is different - brown eyes/blue eyes, brown skin/white skin" theory.  I also thought this was a great summary over here, about how we shouldn't squelch the questions.

Which makes perfect sense, BUT at what point do we teach our curious, outspoken, unfiltered kids that it's not always nice to comment on someone's appearance?  Last summer we passed a (white) kid in full punk regalia sulking outside the park.  "Mom, that guy looks scary".  Said clearly loud enough to be heard.  The kid deserved it - we're on the outer fringes of suburbia, almost literally in the corn fields. Not exactly Punk Central, so you're going to stick out a little,  especially at a kids' park.  Also, when we had his eyes checked he said to our very hale & hearty eye doc "Wow. You're BIG".  I died a little inside on that one.  I suppose this the "art, not science" part of parenting.

But his sister's eyes - They look just like his.  His dad's eyes look Asian, his sister's...don't.  [My eyes just look craa-zeeey].  Not sure what do with that.  Sad, because the reality is reversed.  But also a little happy that he doesn't see it.  He knows the parade of people coming through are to "help her learn things" and I have said in passing that she'll learn things in her own time, when she's ready, when he asks when/what she can/can't do something.  But he has no baseline of expectation.  She started as a baby doing nothing & now she's doing more stuff.  Which is the way it should be.

I will get some of the sibling books out there for him though.
Posted by krlr at 11:19 PM