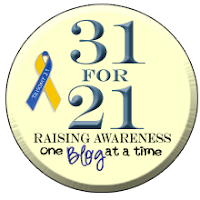 Everyone I know online already knows this but for the family, both honorary & traditional, October is Down Syndrome awareness month.  Five years ago Tricia started 31 for 21, wherein intrepid bloggers will write *gulp* daily to raise awareness & participate in the general revelry.  31 days for trisomy 21.  Given my current output this will require, um, a commitment but anything for the kids, right?

And speaking of anything for the kids...

I made a video.

Yes, go ahead & pick yourselves up off the floor.  My camera shyness is legend but I was briefly able to get over myself and I made a video for my employer's United Way campaign.  They are big (BIG!) United Way supporters and a bunch of months ago someone sent out an email asking if anyone knew or used any of their member agencies.  They caught me at the right moment (i.e. busy shirking my duties on a Friday afternoon) so I shot back a note raving about my girl's inclusive daycare center, which receives some UW funding.  A while later they circled back around (am resisting the temptation to compare the nice PR people to sharks) and asked if I'd be willing to talk about them more.
"Sure!!"
"On video?"
"sure??"
"For the company-wide UW campaign?"
"Ummm..."
"Don't worry," they said, "if it's a trainwreck we won't air it."
[maybe not their exact words]

Those PR people - they're convincing like that.  So in the middle of this summer's heatwave I drove over to a different building, then walked to a third building.  In the heatwave.  And because they normally keep the AC cranked for the computers I was wearing a sweater.  Did I mention the heatwave?  There may have been a wee bit of perspiration.  Then they put me in a teensy tiny room and turned on a baseball field's worth of lights, resulting in a wee bit more than a wee bit of perspiration.  And while I work for a very large corporation which places a great deal of emphasis on their UW participation, the homemade employee endorsements were, at best, a trial run (ha!) and did not merit professional hair & make up people.

So I managed to ramble on a bit about important concepts like inclusion and opportunity and our fabulous day care, all the while trying not to worry about how shiny my forehead was and the status of my lipstick.  They later added in soft music, a great montage of my girl's best photos, and they did a nice job editing out all the ummms and ahhhhs (and the baseball lights did a surprisingly brilliant job of hiding my other chin).  When it eventually aired on the internal website I had more or less moved passed the hand-flapping, hyperventilating, OMG! EVERYONE CAN SEEEEEEE ME!! stage.  I got a couple of nice emails - and then there was one slightly awkward conversation which was more meh, than blog-worthy, but you never know - it might be a long month.  I don't actually think that many people took the time to watch it.  Anyway, the point was I got out there & did it.  So if I can do THAT, surely I can sit my butt down at the computer slightly (ha!) more often this month.  For the kids, right?

[And sorry, but no - blogger won't let me make a single post private, there may be some company property/copywrite thingies, it's WAY too much info for the internets (employer + school)... but mostly?  unlike the majority of my co-workers, I'd worry y'all would actually WATCH it (the horror!) and I'm not quite that brave.  But kisses anyway.]
Posted by krlr at 12:09 PM