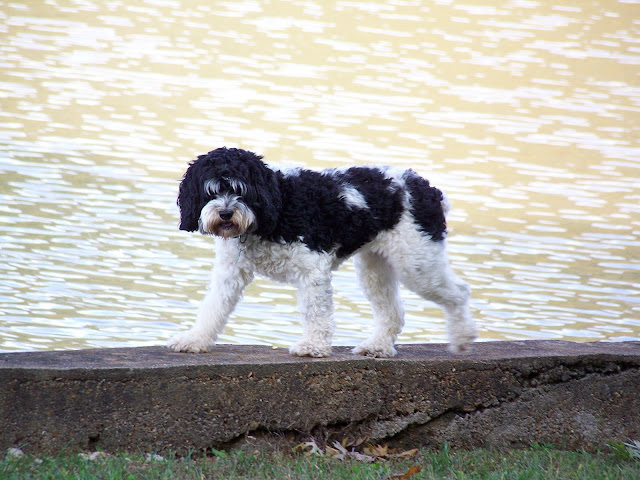 This is Moose.  Moose is the only dog we got as a puppy and she is the most neurotic, worst behaved one of our three.  This says great things about our parenting skills.  We'd just adopted Maude, and Max was still with us- we did NOT need another dog.  But my sister in law's cousin's friend's roommate's sister (or something like that) called and said she'd just bought a puppy but realized she couldn't keep it and was trying to dump it before her child came back from a weekend away.  The breeder wouldn't take it back (read: puppy mill??) but she offered to sell it to us for $200.  I laughed openly at her but said if the only other option was the pound, I'd take the dog.
Tactical FAIL.  She called back 5 minutes later and told me I had a new dog.  And, bonus!, she'd throw in the crate, leash, collar, brush.... any evidence she'd nearly bought her kid a dog was being disappeared.  Sad for the kid, but I guess better that he didn't know?

Moose has some challenges:  She will choke herself on a regular leash and collar - to the point she'll gasp and wheeze.  Turns out those evil looking pronged collars are effective - file that under things I never thought I'd buy.  She's not allowed upstairs because she will jump on your chest in the middle of the night to smell your breath - which is creepy.  She likes to eat mail and pens.  Sometimes she gets really nervous when people come over - which is one of the reasons I am ever, ever grateful for our wood floors.  And for being such a nervous thing she is annoyingly persistent.  She routinely jumps onto our kitchen table to patrol for leftovers.  Yes, I know, highly unsanitary.  I'll yell but she won't jump off unless I'm within 4' of her.  Smart little twerp.  Also?  She's a little dog... with the resulting high yippy bark.  I never thought of myself as a yippy dog person but what can I say?  She grows on you.

There is nothing funnier than watching her slide across the floor when we play fetch.  We never have to worry about toddler crumbs under the table (ok, fine, or on the table either).  She also excels at chewing up the prolific Happy Meal toys.  And she is also the first to snuggle up in my lap and lay quietly, happy for the affection and companionship.

And, no, this is not a metaphor for anything.

Edited to add:  I’ve been trying to be a bit less gloom, doom, & whine around here so thought the cuddly dog bit was a good place to stop last night, but I would be remiss if I didn’t add this part - We thought Moose was a boy.  The lady who gave him her to us said he was a boy, he she was a very fluffy fuzzy puppy, and he she was small – low to the ground, if you will - so we didn’t, um, notice anything.  Or, rather, not notice the lack of anything.  Who checks their dog’s credentials?  We took him her in to be neutered but the vet called Matt a bit later chortling.  She could barely breath she was laughing so hard. They couldn’t neuter our dog.
“Why not?”
“Well, we can spay her. Because she’s a girl…”
Peals of laughter.
Matt made ME go pick her up when they were done.
Posted by krlr at 10:23 PM