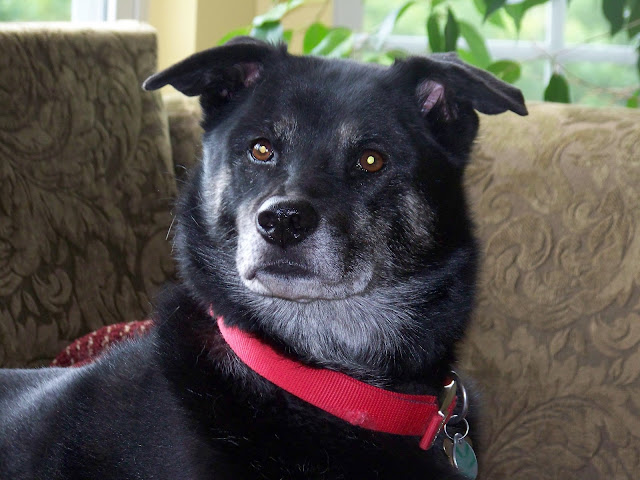 This is Maude.  We adopted her about 5 years ago.  I saw a picture of her beautiful face on the Humane Society webpage and she reminded me of my handsome, handsome dog Max so I drove over to meet her.  When I saw her in person, however, I gasped a little.  She has short legs and a body like a tootsie roll. Like a Rottweiler-Dachshund mix.  She has half a tail - not 'docked' (not that that would have been OK either), but a tail stump, as if it had been amputated at mid-point.  The Humane Society had nicknamed her 'Princess' (I believe ironically).  Let's just say she wasn't going to win Westminster.  Despite this, she was a very, very sweet dog.  After some begging, bargaining, & negotiating, Matt reluctantly took our son over to meet her.  We already had 2 dogs.  Maude would be #3.  What kind of nutjobs have 3 dogs with a one year old in the house?  But when he went into the 'meet & greet' room she came over, leaned against his leg, and put her head on his knee.  Matt was smitten.  Also, who else was going to take a half-tailed stumpy Rott mix?

She had a couple seizures when we first got her and we eventually figured out she had a thyroid condition, for which she gets twice daily pills.  She also has a non-specific eating disorder.  She moans when it's time to eat and, on a couple occasions when we've forgotten to close the pantry door, has literally eaten herself sick.  She regularly swipes whole loaves of bread & sticks of butter, like most dogs, but she also likes paper towels, the kids' art projects, kitchen towels, and my girl's shirts, if we forget to put a bib on her (my daughter, not the dog).  Maude will actually EAT the shirt.  You'd think we'd learn to keep the laundry away from her.  Maude, by the way, is short for Marauder, not the Bea Arthur show, though she can be a grumpy old lady too.

Maude's favorite things, after food, are car rides, walks, and sleeping in the back crook of your knee.  She also has a lovely deep bark which helps scare away solicitors and Scary People.  She will not fetch. Anything.  We think she might have been abused because when she first arrived she would cower and hide if Matt & I were "discussing" anything.  I think she trusts us now since not only will she not run off to hide, I can almost see her little doggie eyes rolling.  Just kiss & make up already!

She is also my daughter's favorite dog.  Because she has soft fur and will lay quietly under toddler fingers.

They told us she was probably 5-6 years old when we found her 5 years ago.  She tore her doggie ACL a while back but seems to have recovered.  It doesn't stop her from climbing into my lap (all 65# of her) to remind me about her dinner, or keep her from exploring the counters, or twirling madly if she thinks she's going for a walk.  I found a big lump on her side a few weeks ago.  It's either nothing, as several other small ones have been, or Everything.  I haven't called the vet yet because what are they going to do?  She's not in pain, and we're not going to operate on a 10-11 year old dog to remove a tumor, cancerous or not.  But I might also just be in denial & hoping it goes away.  I might also leave a couple extra treats on the counter for her to find.
Posted by krlr at 12:17 AM