Only the second night and already slacking!  It was a good weekend - blueberry pancakes, time with the cousins, laundry, and I even broke out the vacuum cleaner (I only used it in one room but no need to get sucked up in the details).  I even spent an unheard of TWO nights out with friends, on Thursday and Friday.  Such a decadent life I lead!

Today we went to the park but I was lazy with the camera.  This one would have been cute, had it been in focus: 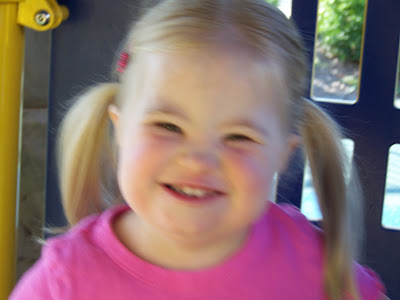 And a couple more.  Slightly bedragged "park hair".  It was hyper cute 20 minutes earlier, I swear.
She's getting so big.  She climbed up the straight ladder today at the park, mostly by herself.  And she's now officially in a toddler bed.  Which she refuses to actually sleep in so we'll move her sleeping hulk off the floor several times during the night.  We never hear any thuds though, which we attributed to the giant stuffed monkey next to her bed but tonight she confirmed my suspicions when I returned to her room exactly 63 seconds after putting her to bed to find her already on the floor - she lays down nicely, smiles at me as I leave, then scurries over to the door & tries to look thru the crack at the bottom to keep tabs on those with later bedtimes. Delightfully sneaky, she is.
Posted by krlr at 9:01 PM