On flight #2/3 yesterday, after a little nap to recover from my 4am wake up call, I started eavesdropping on the woman in front me as she told Random Guy all about her adventures with genetic counseling, searching for various specialists, and her child's eventual diagnosis with.... Wait!  What?  Darn chatty pilots.  Much as I love to talk special needs shop, my aversion to conversing with strangers won out so I didn't tap mom on the shoulder and demand to know which nurse at Children's she'd been complaining about.  Epitome of social refinement, I am.  What I gathered between revving jets and cockpit announcements was that her child was eventually diagnosed with something rare.

Also that the geneticist had apparently tried to reassure them (pre-natally?) by saying, "Worst case scenario it's Down syndrome."

Worst case?  WORST CASE?!  I have no idea what this child ended up with and/or what set of data they were looking at but methinks the geneticist needs to get out more.

I have read some horrific "finding out" stories this month, courtesy of 31 for 21.  Medical professionals who don't even bother to ask if, just when they should schedule a termination.  Doctors who deliver the news like a death sentence, then flee the room.  I've long believed my relatively easy adjustment was a twisted side effect of losing Brennan.  Heart surgery?  Scary.  Cognitive delays?  Not ideal.  But, hey, the kid's alive, so we can deal. 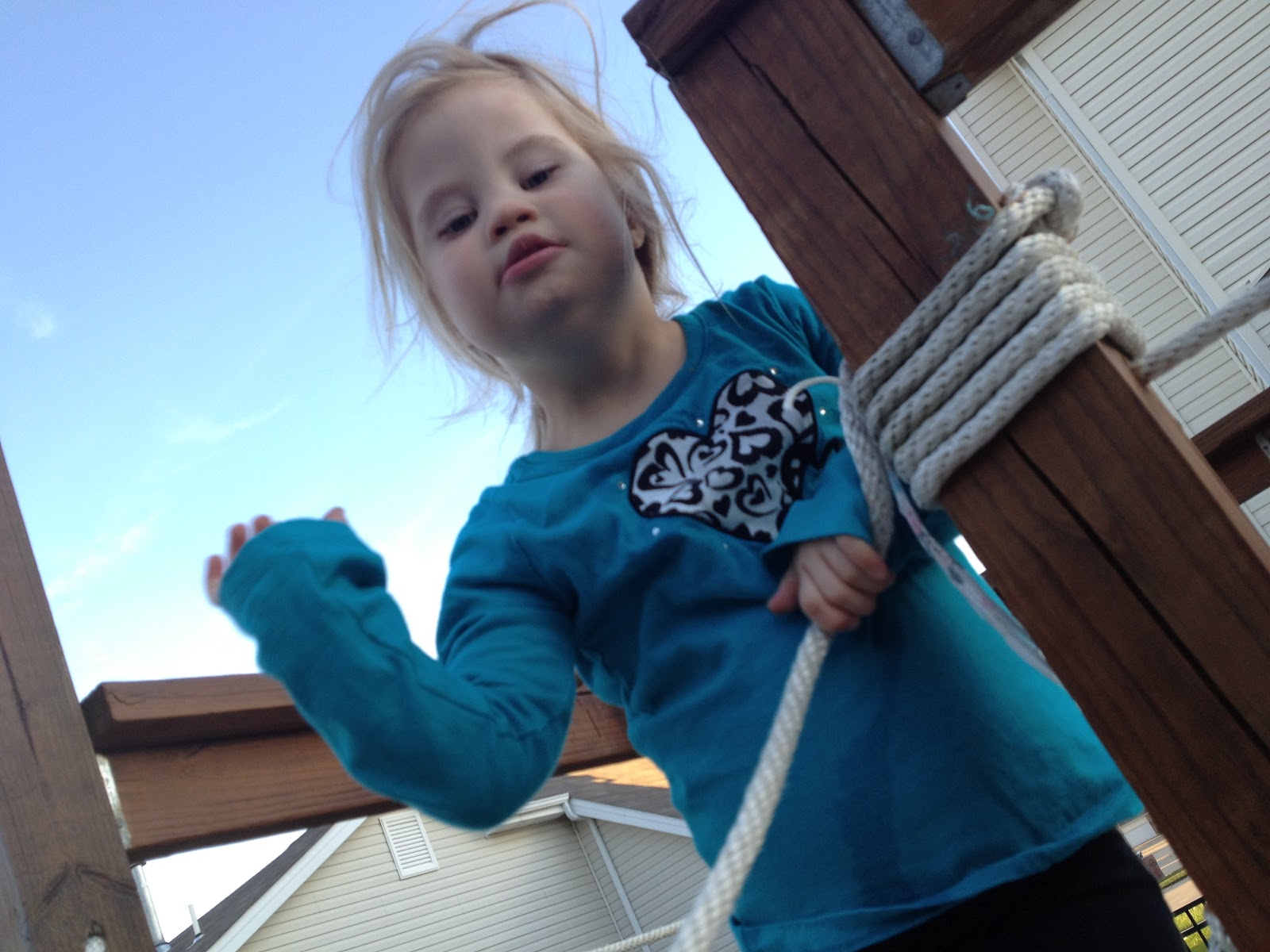 But in retrospect, and partially prompted by a conversation on facebo0k, I have to give a nod to a few people.  At the fourth (!) ultrasound appointment, when the tech took a long, long time and then went to fetch the doctor because The Girl's heart was missing its center, they marched me right upstairs to the cardiologist's office.  I vaguely remember Matt being there so I'm no longer sure if this was that  visit, when they told me about the exceptionally high correlation between AVSD and Down syndrome or a second prenatal visit after we'd confirmed her chromosomal count via amino.  I know Matt came that first day, but not if he arrived in time to meet the doctor.  I do remember the cardiologist saying, relaxed and upbeat, "They've completely revamped they way they teach these kids and she'll be more productive than half the people out there."

I don't remember having any conversations about it with my OB (I do like him but my pregnancy was mostly managed by the perinatal center), but at the first visit after our news became official, the OB nurse ran and grabbed a Christmas card from one of their patients - a little girl and her brother with Down syndrome, snuggling.  She said, "I only know one other family... but aren't they beautiful?"

She is reason I send Christmas cards to all our medical providers. 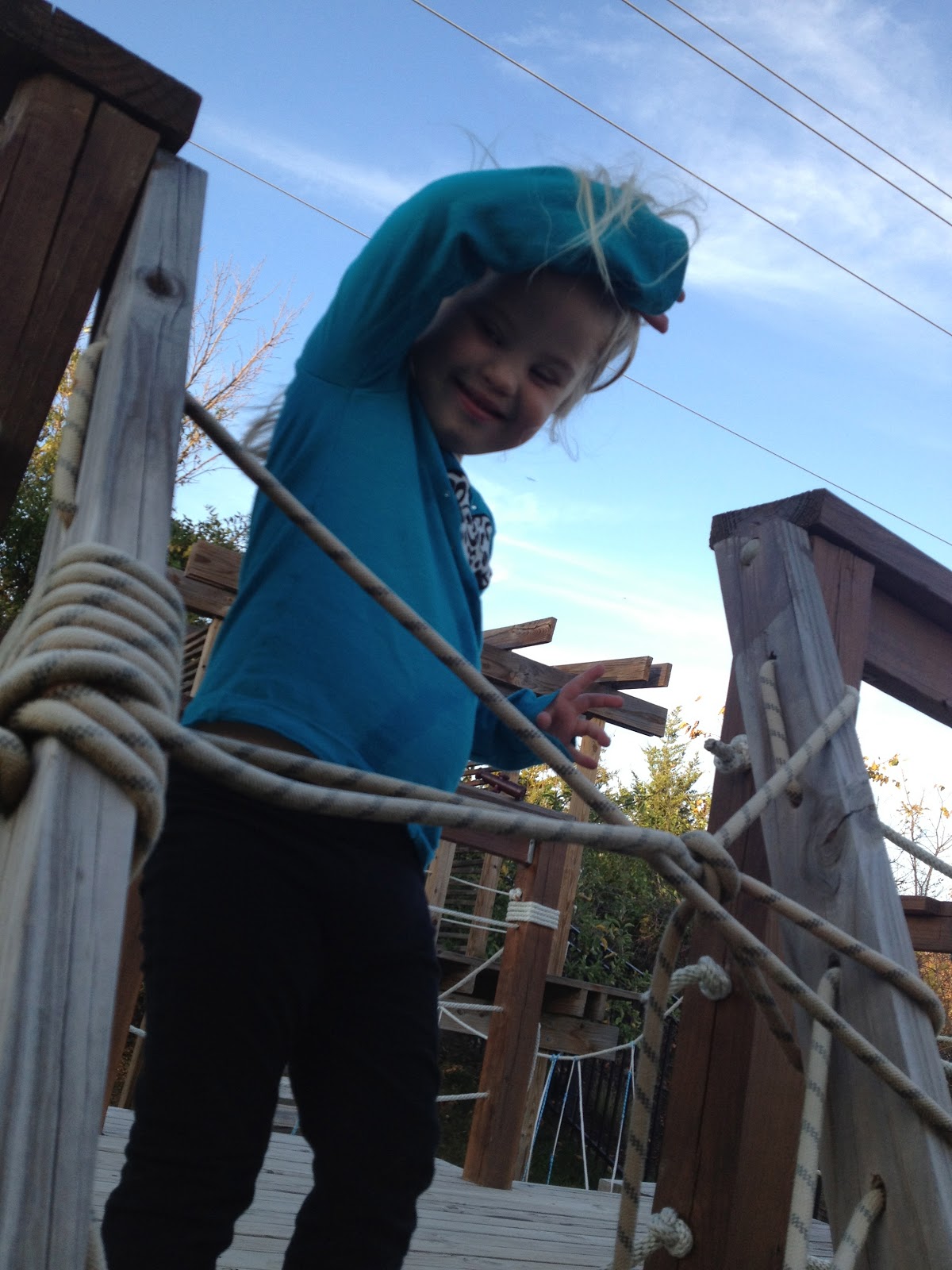 I'm also going to give a little reluctant nod to all the other people who told me what sweet, loving children "they" are.  It rankles me now as yet another stereotype, but at the time I'll admit a drew a little comfort from sweet & loving.  That didn't sound too bad, y'know?

You know what sounds bad?  Worst case.  You know what might color a mom's reaction to her newly diagnosed baby?  Worst case.  I'm not one of those mythical creatures who believe babies with a third 21st chromosome are angels sent by God - that little bit of extra does bring some extra wrinkles to life.  But worst case is not this girl, climbing all over the fort, requesting her favorite "bear book", and pouting tonight because Mommy was gone for 4 days.  Worst case is calling funeral homes to see if they can pick your baby up from the hospital morgue.  Worst case is a medical professional not knowing what.the.fuck. she is talking about. 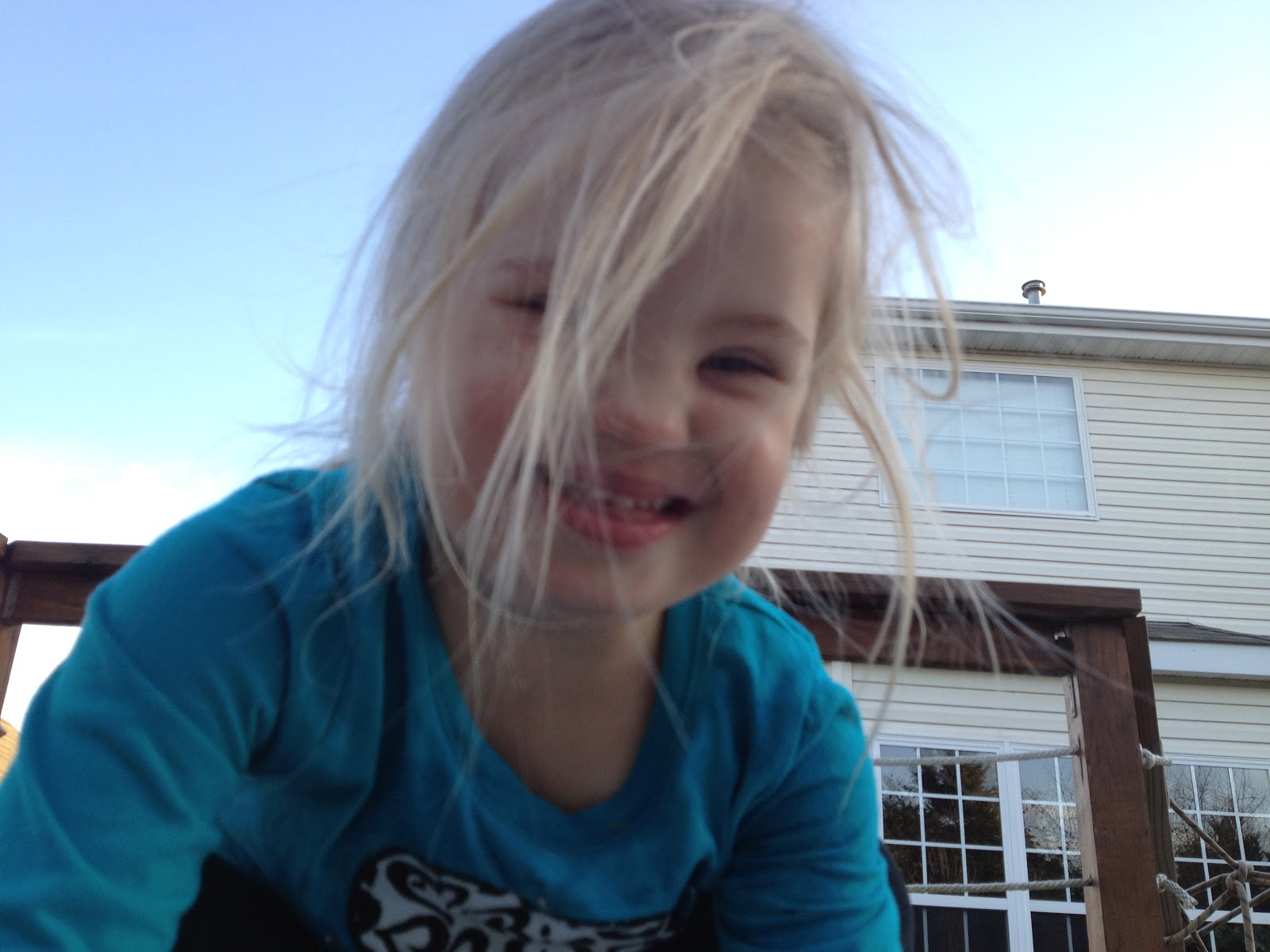